Attorneys camp out at Los Angeles International Airport to assist travelers from Muslim countries on June 29 after a travel ban was put in place. On Thursday a Hawaii judge declined to clarify the scope of the travel ban, suggested that the U.S. Supreme Court should rule. Photo by Jim Ruymen/UPI | License Photo

The ruling Thursday by U.S. District Court Judge Derrick Watson of the District of Hawaii will keep the portions of the travel ban, ordered by President Donald Trump, in place. It will likely generate additional court filings as Hawaii seeks to limit the order, The Washington Post said Friday.

In June the Supreme Court allowed parts of the travel ban, restricting entrance to the United States by visitors from selected Muslim-majority countries, to go into effect. The court approved a ban on foreign nationals without a "bona fide relationship with any person or entity in the United States."

The government then issued new guidelines stipulating that applicants must demonstrate a relationship with a parent, spouse, fiancée, child, adult son or daughter, son-in-law, daughter-in-law or sibling already in the United States in order to enter the country. Other identifiable relatives are excluded under the order. Lawyers for Hawaii challenged the government's interpretation, arguing that it violated "the Supreme Court's instruction" because it excluded people such as grandparents "with a close familial relationship." The lawyers asked Watson for a clarification.

The ruling means that the government can temporarily continue to block travel of foreign nationals if they are grandparents, nieces, nephews, cousins or in-laws of people in the United States.

Watson's order indicated that he would not intervene with the Supreme Court ruling and that Hawaii must seek clarification from the high court.

U.S. News // 17 minutes ago
Federal agents arrest 'Oath Keepers' leader for U.S. Capitol attack
Jan. 19 (UPI) -- Federal prosecutors on Tuesday charged the leader of an anti-government militia group with conspiracy and obstruction of official proceedings stemming from the violent assault on the U.S. Capitol this month.

U.S. News // 5 hours ago
Senate returns; McConnell says Trump 'provoked' mob that attacked Capitol
Jan. 19 (UPI) -- In his first remarks on the Senate floor since the Capitol attack, Republican leader Mitch McConnell gave his most vocal condemnation yet of the violence that broke out two weeks ago and led to five deaths. 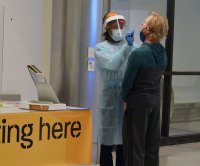 U.S. News // 3 hours ago
Biden will not ease U.S. travel ban for Europe, Brazil travelers, official says
Jan. 19 (UPI) -- President-elect Joe Biden's administration has signaled it will cancel a move by the Trump administration to lift COVID-19 travel bans to the United States from most of Europe and Brazil.

U.S. News // 7 hours ago
Washington, D.C., set for slate of events Wednesday for Biden-Harris inauguration
Jan. 19 (UPI) -- Amid a global pandemic and the heaviest security of any inauguration in modern American history, President-elect Joe Biden is set to be sworn in Wednesday as the 46th president of the United States.