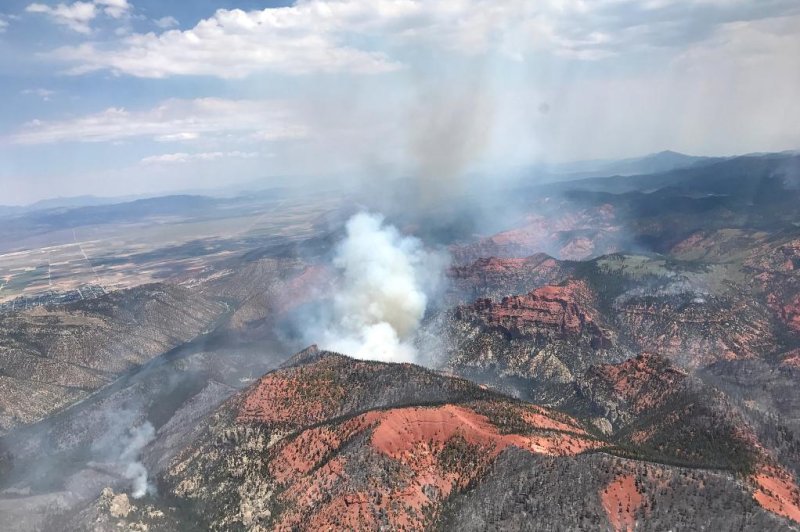 The Brian Head Fire in Utah, one of several fires in the U.S. southwest, has grown to more than 54,200 acres as of late Wednesday and is 10 percent contained, Utah forestry agency officials said. Photo courtesy of Utah Gov. Gary Herbert

June 29 (UPI) -- The Utah Department of Public Safety released the 911 call made by the man who apparently started the destructive Brian Head Fire.

The fire is one of several burning up thousands of acres across the U.S. Southwest. High temperatures, dry conditions and strong winds have started blazes and fanned flames in the region.

The Utah Division of Forestry, Fire and State Lands said the Brian Head Fire in southwest Utah has burned more than 54,200 acres as of late Wednesday. The fire is 10 percent contained.

The fire was started June 17 by a resident burning weeds and has been fueled by hot, dry conditions and strong winds.

The man who apparently started the Brian Head Fire called 911 to report that the fire was "getting out of control," calls released Wednesday show.

The dispatcher then asked the caller about the size of the fire, to which the owner replied: "It's a forest! It's big. It's like 50 feet by 50 feet. It's big -- we need help!"

The name of the caller was not released.

The Arizona Department of Forestry and Fire Management said the Goodwin Fire in Prescott National Forest has burned more than 20,640 acres as of early Thursday. The fire is 1 percent contained.

The Arizona forestry agency said the fire, which started Saturday from an unknown cause, could spread east and northeast on Thursday and Friday.

More than 752 firefighters are fighting the fire, as helicopters and fixed-wing aircraft drop fire retardant. The fire has forced the evacuation of several small towns: Mayer, Chaparral Hills and Poland Junction.

Officials said strong winds helped fuel the fire burning mostly through chaparral and heavy grass that have been untouched for nearly 40 years.

California Department of Forestry and Fire Protection said the Manzanita Fire, which is burning in Riverside County, has burned more than 6,300 acres. The fire, which started Monday by a car crash, is 43 percent contained.

The U.S. Forest Service said the Mart Fire, which started near a Walmart on Tuesday in San Bernardino County, has burned more than 900 acres. The fire is 15 percent contained and an investigation into the cause of the blaze is ongoing.

Cal Fire said the Hill Fire, which started Monday in the San Luis Obispo County, has burned about 1,600 acres. The fire is 65 percent contained.

The Los Angeles County Fire Department said the Placerita Fire that started Sunday after a motorist crashed into a tree has burned more than 780 acres and is 95 percent contained.

U.S. News // 3 hours ago
Officials: Controlled release of toxic chemicals from derailed train in Ohio completed
Feb. 6 (UPI) -- A controlled chemical release from several rail cars that were part of a train that derailed in Ohio late last week has been completed, officials said.

U.S. News // 8 hours ago
Biden to travel to key 2024 states after State of the Union
Feb. 6 (UPI) -- President Joe Biden will travel to Wisconsin and Florida later this week to showcase his economic agenda, as well as plans to lower health care costs, following his State of the Union speech Tuesday.

U.S. News // 12 hours ago
Utah bills would ease student dress codes for religious, cultural items
Feb. 6 (UPI) -- As high school students around the country fight for the right to wear religious and cultural items at graduation and athletic events, Utah is considering legislation to allow it.
Advertisement