U.S. District Judge Xavier Rodriguez handed down the sentences on Wednesday over Millan Vasquez's direct role in 18 deaths and his involvement in the cartel's drug-trafficking operations from 2009 and 2015, when the Los Zetas are accused of carrying out more than 300 killings in northern Mexico.

U.S. law allowed federal prosecutors to charge Millan Vasquez for killings carried out in Mexico as long as those murders were carried out as part of a drug conspiracy tied to the United States.

One of the witnesses in the trial testified that Millan chopped up a 6-year-old girl with an axe while she was still alive and made her parents and other witnesses watch while tied up, the San Antonio Express-News reported. Millan then ordered the parents to be killed, the witness said during the 2016 trial.

"The level of violence ... is something that is rarely seen in the courtroom and .... rarely seen even in fiction," Assistant U.S. Attorney Russ Leachman told judge Rodriguez.

Los Zetas is a vast criminal enterprise involved in drug, firearms and sex trafficking based in Nuevo Laredo, a town bordering the United States in Tamaulipas. The cartel is a rival of Joaquin "El Chapo" Guzman's Sinaloa Cartel. 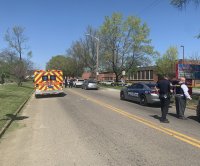 U.S. News // 3 hours ago
Expert says George Floyd died of asphyxia; judge won't sequester jurors in Chauvin trial
April 12 (UPI) -- Testimony in the Derek Chauvin murder trial in Minneapolis entered its third week on Monday with a judge rejecting a defense motion to sequester the jury due to a separate police shooting involving another Black man.

U.S. News // 4 hours ago
Uber, Walgreens, PayPal to cover COVID-19 vaccine rides for needy in U.S.
April 12 (UPI) -- Walgreens is partnering with Uber and PayPal in an effort to give needy people rides to pharmacies so they can be vaccinated against COVID-19, the companies said Monday.