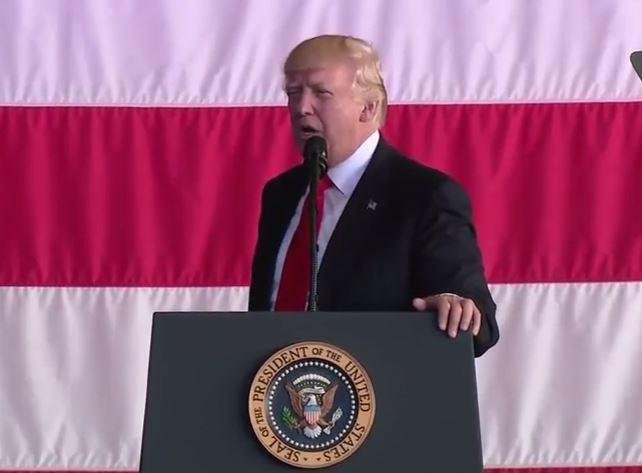 May 27 (UPI) -- President Donald Trump wrapped up his first foreign trip, calling it a "home run" to U.S. troops stationed at a Sigonella Naval Air Station in Sicily, Italy.

"We have been gone for close to nine days," Trump said before departing for Joint Base Andrews in Maryland. "And I think we hit a home run no matter where we are.

"We're thrilled to be here right now and we're getting on that very big plane and we're heading back to Washington and the United States."

Trump first traveled to Saudi Arabia, Israel and the Vatican to visit their leaders. Then he attended the North Atlantic Treaty Organization summit in Brussels, Belgium, and the G7 summit in Sicily, Italy.

"I can think of no better way to conclude our first foreign trip than to spend the time with you right here with the incredible men and women of the United States Navy and with all of our brave soldiers, sailors, airmen, and Marines and our great civilians who support them," Trump said.

He reiterated the U.S. commitment to the North Atlantic alliance.

"Money is actually starting to pour into NATO from countries that would not have been doing what they're doing now, had I not been elected, I can tell you that," the president said. "We are behind NATO all the way. All of us will be more safe and secure if everyone fulfills their obligations, the way they're supposed to, right?"

RELATED Trump, May other leaders at G7 sign agreement against Internet terrorism

During the summit he didn't mention support for Article 5, which is NATO's commitment to mutual defense in the event of an attack on a member.

He said the G-7 "was a tremendously productive meeting where I strengthened America's bonds. We have great bonds with other countries. We concluded a historic week for our country."

He also told troops they're "going to be doing a lot of winning."

The president mentioned the terrorist attack Monday in Manchester, England.

"Our travels took us to some of the holiest sites in the three Abrahamic religions and to gatherings of both America's oldest and newest friends. We traveled the world to strengthen long-standing alliances and to form a new partnership among nations devoted to the task of eradicating the terrorism that plagues our planet," Trump said.

"You are the patriots who keep the fires of liberty burning," the president told the crowd at the airbase. "I am proud to be with you today as your commander in chief. I am honored to have had this time to spend with you," he said.

U.S. News // 10 hours ago
Forecasters: Central U.S. will plunge back into winter next week
Chilly air, which has gripped the central United States all week, will be reinforced by another shot of cold weather early next week, forecasters said Saturday.

U.S. News // 12 hours ago
West Point expels 8 cadets, holds more than 50 back a year in cheating scandal
April 17 (UPI) -- West Point has expelled eight cadets and held back more than 50 for a year after completing its investigation into cheating on a remote learning May calculus exam.

U.S. News // 13 hours ago
Death toll increases to 4 in capsized boat near Louisiana; 9 missing
April 17 (UPI) -- The U.S. Coast Guard said it's recovered four bodies from a commercial vessel that capsized off the Louisiana coast earlier this week, but nine remain missing.