Trump has unscheduled meeting with Kissinger

May 10 (UPI) -- President Donald Trump met Wednesday with Henry Kissinger in a meeting not listed on the president's schedule.

The press pool was invited to the Oval Office at 11:20 a.m. for "what some had assumed would be a spray of President Trump's meeting with Russian Foreign Minister Sergey Lavrov," according to the pool report.

Instead they saw the president sitting with the 93-year-old Kissinger, national security adviser under former President Richard Nixon and later secretary of state for Nixon and Gerald Ford.

The president said he met with Kissinger to talk about "about Russia and various other matters."

Trump said it was "an honor" to meet with Kissinger, whom he described as "a friend of mine for a long time."

They also met on Nov. 17 in New York nine days after he was elected preside. Before the election, they met at Kissinger's New York home on May 18, 2016.

Wednesday's meeting came one day after Trump fired FBI Director James Comey, whose bureau is investigating ties between the president's campaign and Russia.

The firing has been compared to when Nixon forced out Archibald Cox, the special prosecutor charged with investigating the Watergate scandal in 1973. Attorney General Elliot Richardson and his deputy, William Ruckelshaus, handed in their resignations during the so-called "Saturday Night Massacre."

Trump was asked about Comey's firing during the press availability.

Trump then was asked whether it affected " your meeting with the Russians today?

Trump responded: "Not at all." 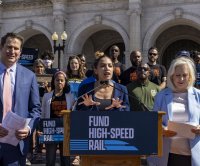