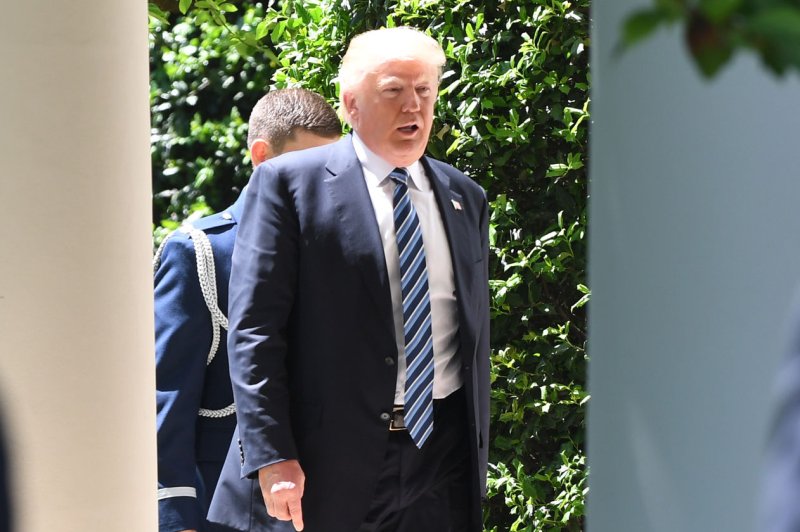 President Donald Trump walks to the Oval Office at the White House on Tuesday. The American leader and Russian President spoke by telephone on Tuesday, during which they addressed various issues. Photo by Pat Benic/UPI | License Photo

May 2 (UPI) -- Presidents Donald Trump and Vladimir Putin spoke by telephone on Tuesday and talked about meeting this summer in Germany on the sidelines of the G20 summit.

A White House report of the phone call between the two leaders did not include news of the possible meet, but the Kremlin's did.

"Vladimir Putin and Donald Trump agreed to continue their telephone contacts and spoke in favor of arranging a personal meeting during the G20 Summit in Hamburg," Putin's office said.

The G20 is the name given to an international forum for the governments and economic governors from 20 countries. Since the summit's inception nearly a decade ago, it has mostly occurred on an annual basis.

In the American assessment of the call, the two leaders talked about potential resolutions in Syria -- where more than a half-million people have died since the civil war there began in 2011. Russia has supported the regime of Bashar al-Assad while the United States has backed the rebels.

"President Trump and President Putin agreed that the suffering in Syria has gone on for far too long and that all parties must do all they can to end the violence," the White House said. "The conversation was a very good one, and included the discussion of safe, or de-escalation, zones to achieve lasting peace for humanitarian and many other reasons."

Putin and Trump have not yet met in person since the Republican's new administration took office, but both leaders have expressed hope of improving U.S.-Russian relations. Trump has spoken favorably of Putin in the past and the Russian leader has likewise raised the possibility of positive relationship between governments.

The Kremlin called Tuesday's call "businesslike" and "constructive." The White House said the two also talked about the "very dangerous situation" in North Korea -- and that a U.S. representative will be sent to cease-fire talks in Kazakhstan on Wednesday and Thursday.

U.S. News // 5 hours ago
Kidnapped Texas woman reunited with family after 51 years
Nov. 29 (UPI) -- A woman who was kidnapped as an infant was reunited with her birth parents after more than 50 years, her family confirmed this week.

U.S. News // 8 hours ago
Biden encourages Congress to take up rail negotiations
Nov. 29 (UPI) -- President Joe Biden called on congressional leaders from both parties to work together Tuesday to avoid a rail strike that could cripple the economy in the middle of the holiday season.
Advertisement