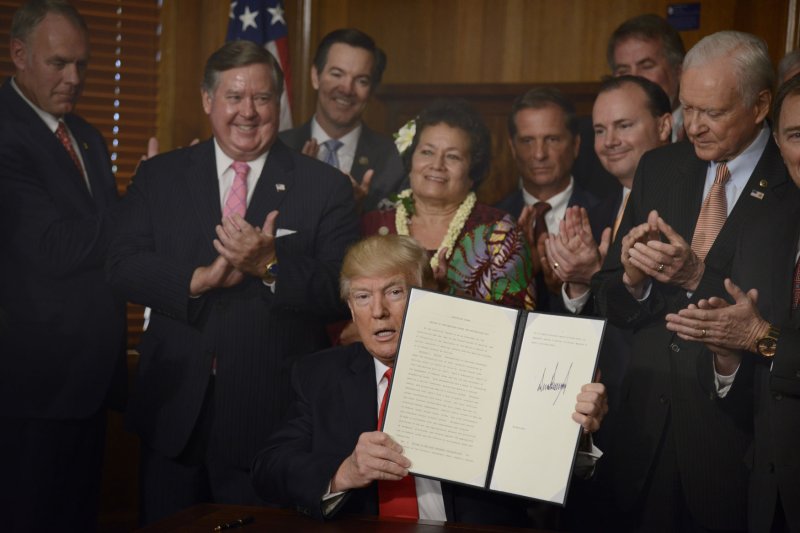 Obama placed 265 million acres under the control of the federal government, more land than any previous president. The designations ranged from underwater canyons and mountains off Cape Cod, Mass., to the vast Papahānaumokuākea Marine National Monument in the Pacific Ocean.

"The Antiquities Act does not give the federal government unlimited power to lock up millions of acres of land and water, and it's time we ended this abusive practice," Trump said at the signing at the Interior Department.

A Texas-based company has been given permission to drill in Bears Ears.

During a news conference Tuesday, Zinke stressed the order does not revoke the monument status from any site

Instead, Zinke has 45 days to file interim recommendations and 120 days to suggest legislation to revoke or reduce down the size of any monuments that cover 100,000 acres or more created under the Antiquities Act.

The 1906 Antiquities Act allows a president to designate land for protection. Commercial excavation, including resources drilling, is strictly prohibited and outdoor activities are affected.

The outdoors industry and environmental groups have praised the designations, along with Native American tribes that consider land sacred.

"An executive order that undermines national monuments is not only an attack on America's heritage and history, it's an attack on the millions of jobs and hundreds of billions of dollars that depend on our parks, monuments and other public land," Jennifer Rokala, executive director of the Center for Western Priorities, wrote in an email to the Los Angeles Times.

But the energy industry has been lobbying for access to more public lands, and easing the environmental reviews and other permitting processes.

The American Petroleum Institute has urged Congress to revamp the Antiquities Act.

"There's highly prospective areas for the industry and we've seen considerable development on state and private lands in the vicinity of public lands, which would demonstrate that there could be far greater opportunities if we had a more streamlined process and more opportunities by eliminating these types of obstacles to development."

Trump, who has been skeptical of climate change, wants to revive energy production in the United States. The president already has taken steps to keep coal mines open and revoke Obama-era initiatives to combat climate change.

"This administration has made it clear that they're going to do the bidding of the oil and gas industry," said Jennifer Rokala, executive director of the Center for Western Priorities, a Colorado-based conservation group, said to Politico.

U.S. News // 1 hour ago
NYC judge strikes down law allowing noncitizens to vote in city elections
June 27 (UPI) -- A New York City judge on Monday struck down a landmark law extending the right to vote in local elections to noncitizen immigrants who live, work and pay taxes in the city.

U.S. News // 2 hours ago
Taiwan-based GlobalWafers to build $5 billion plant in Texas
June 27 (UPI) -- Taiwan-based technology company GlobalWafers announced it will build a $5 billion factory in Sherman, Taxas, to supply silicon wafers to Intel in an effort to ease a chip shortage in the United States.

U.S. News // 3 hours ago
Costco recalls solar umbrellas over lithium battery fire risk
June 27 (UPI) -- Costco is recalling thousands of solar umbrellas being sold at its U.S. and Canadian locations, after some of them caught fire, according to the U.S. Consumer Product Safety Commission.