Authorities respond after reports of a shooting at the West Lake station Thursday in Atlanta. Image courtesy WSB-TV

April 13 (UPI) -- One man was killed and three people injured in a "targeted, isolated" shooting Thursday on one of the largest rapid transit systems in the U.S.

Zachariah Hunnicutt, 38, was the victim of the attack on a MARTA train in Atlanta, Transit Police Chief Wanda Dunham said. It's not known what led to the shooting.

MARTA, the Metropolitan Atlanta Rapid Transit Authority, is the nation's eight-largest by ridership, according to the American Public Transportation Association.

In response to the shooting, MARTA police will have an increased presence on the train.

The suspect, who tripped and fell trying to escape, was taken into custody, but his name has not been released.

Two men and a woman who were also shot are in stable condition, authorities said.

"My thoughts and prayers remain with the victim and everyone impacted in today's incident," he said.

3 arrested in Atlanta I-85 fire, bridge collapse Huge section of I-85 in Atlanta collapses after fire Plane crashes in Georgia neighborhood, killing pilot

U.S. News // 4 hours ago
Nevada Assembly repeals death penalty, sends to Senate
April 13 (UPI) -- Nevada's Assembly voted Thursday to abolish the death penalty, a bill that, if signed into law, would make the state the 24th to outlaw the punishment.

U.S. News // 17 hours ago
Biden honors slain Capitol officer: 'When will defies fear, that is heroism'
April 13 (UPI) -- U.S. Capitol Police officer William "Billy" Evans, who was killed during an attempted building breach this month, lay in honor Tuesday in the Capitol Rotunda. 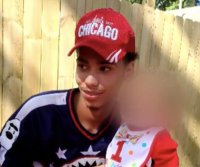