April 12 (UPI) -- U.S. officials said the FBI obtained a secret court order in the summer to monitor the communications of former Donald Trump policy adviser Carter Page to investigate whether he was acting as an agent of Russia.

Law enforcement and other U.S. officials said the FBI and the Justice Department convinced a Foreign Intelligence Surveillance Court judge there was probable cause to believe Page was acting as an agent of a foreign power, The Washington Post reported, citing anonymous sources.

The court order, known as a FISA warrant, is highly classified and issued in secret. The court order issued under former President Barack Obama's administration provides evidence the FBI had reason to believe during the presidential campaign that a Trump adviser was in contact with Russian agents.

The U.S. intelligence community said it found that Moscow was responsible for carrying out cyberattacks on the Democratic National Committee, as well as a smaller attack on its Republican counterpart, Hillary Clinton's presidential campaign and manager John Podesta, and other political organizations in attempts to influence the 2016 presidential election in favor of Trump.

FBI Director James Comey in March confirmed his agency has been investigating for months whether the Russian government, under the order of Russian President Vladimir Putin, attempted to influence the outcome of the U.S. election.

Page has not been accused of any crimes and it is unclear whether the Justice Department may seek charges against him or others in connection to the Russia hacking investigation.

Page, who has repeatedly denied wrongdoing, said he is being made into a political scapegoat. He told Politico the FISA warrant "shows how low the Clinton/Obama regime went to destroy our democracy and suppress dissidents who did not fully support their failed foreign policy."

Page suggested the FISA warrant was issued without proper evidence to point to probable cause.

"This confirms all of my suspicions about unjustified, politically motivated government surveillance," Page told The Washington Post. "I have nothing to hide."

U.S. News // 2 hours ago
Fiery Tesla crash in Texas kills 2 men, no one in driver's seat, authorities say
April 19 (UPI) -- Two people died when a Tesla going at a high speed with no one in the driver's collided into a tree and caught fire in an area near Houston, Texas, authorities said Monday. 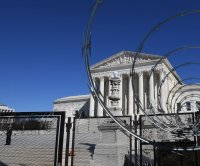 U.S. News // 4 hours ago
Facebook will remove threatening content as Derek Chauvin trial comes to a close
April 19 (UPI) -- As the Derek Chauvin murder trial for the killing of George Floyd comes to a close Monday, Facebook said it is preparing to ward off online content inciting violence.

U.S. News // 5 hours ago
College-bound football player among 3 shot dead in Texas; suspect arrested
April 19 (UPI) -- Police arrested a former law enforcement officer on Monday who they say is suspected of killing three people in Austin, Texas, over the weekend.