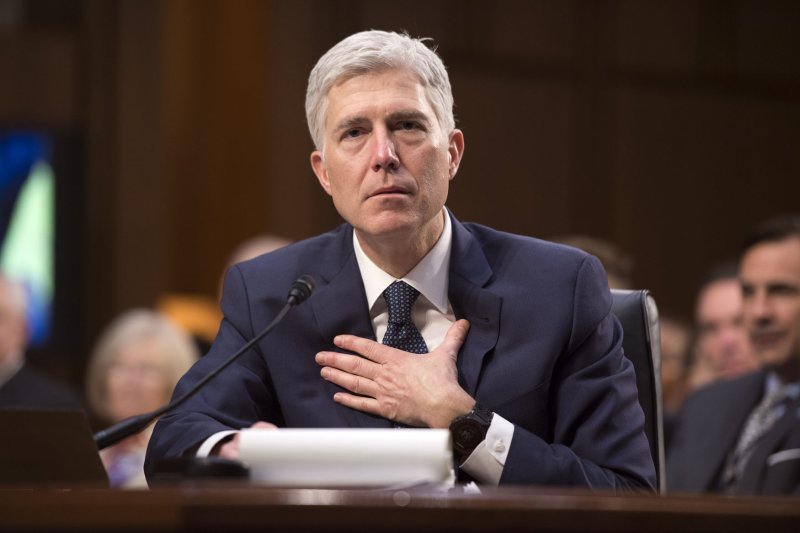 Supreme Court Justice nominee Neil Gorsuch testifies during the third day of his confirmation hearing before the Senate Judiciary Committee on Capitol Hill on March 22. On Friday, the Senate voted to approve his nomination to the high court. Photo by Kevin Dietsch/UPI | License Photo

Gorsuch's conformation came after bitter partisan warfare in the Senate. Democrats filibustered his nomination, citing previous rulings they did not like, but the subtext went deeper than judicial philosophy. Democrats were furious Merrick Garland, former President Barack Obama's nominee to fill the seat left empty by the death of Judge Antonin Scalia last February, was never granted a hearing by Republicans.

After it became clear Gorsuch would not win enough Democratic votes to pass the traditional 60-vote threshold in the Senate, Republicans used the so-called "nuclear option" and gutted longstanding Senate rules for Supreme Court nominees, clearing the way for a simple majority to approve his nomination.

Gorsuch, 49, will become the 113th Supreme Court justice in the nation's history and his ascension could have an immediate impact on several high-profile cases. Since Scalia's death, the court had been ideologically deadlocked, with four liberal justices and four conservatives.

Several crucial cases are on the high court's horizon.

First up could be a case with wide ramifications on voting laws. After the Supreme Court, with Scalia in the majority, struck down key elements of the Voting Rights Act, North Carolina enacted tough new restrictions. Democrats sued to overturn the new voting rules, arguing the Republican-led state Legislature targeted minorities by reducing the state's early voting period and required state-issued IDs to register.

The Supreme Court also appears to be the ultimate destination for a series of legal challenges to Trump's executive order banning travel from six majority-Muslim countries. District courts have split on the legality of Trump's order, which remains on hold pending appeals. The varying lower court rulings virtually assure the matter will wind up before the nine justices in the coming months.

After his swearing-in, which could happen as early as Friday, Gorsuch will have the opportunity to begin asserting authority. The justices are scheduled to meet privately Thursday to vote on which petitions they will hear next term. Among them are a case out of Washington state about whether business owners have the right to deny service to same-sex couples on religious grounds. The justices are also scheduled to hear oral arguments on a case accepted when Scalia was still alive about whether religious schools are subject to state regulations, which could provide justices with the opportunity to examine decades of precedent on matters of church versus state.

With his immigration plan stalled and a healthcare overhaul defeated by members of his own party, Gorsuch's confirmation represents Trump's first legacy-building victory as president. At 49, Gorsuch becomes the youngest member of the court by nearly eight years, giving him the opportunity to affect jurisprudence for decades to come.

U.S. News // 45 minutes ago
New Orleans mayor walks back threat of canceling Mardi Gras
Aug. 19 (UPI) -- Mayor LaToya Cantrell on Friday walked back her threat to cancel Mardi Gras over a shortage of police and emergency services in New Orleans.

U.S. News // 6 hours ago
Emotional Vanessa Bryant testifies in civil suit against LA County over death photos
Aug. 19 (UPI) -- Vanessa Byrant got emotional in the courtroom Friday, as the widow of NBA legend Kobe Bryant took the stand in a federal lawsuit against Los Angeles County over photos taken at the crash site where her late husband died.

U.S. News // 7 hours ago
Wayfair to lay off 870 employees worldwide
Aug. 19 (UPI) -- Online retailer Wayfair announced it is reducing its workforce by 870 employees as sales have slowed after pandemic highs.

U.S. News // 8 hours ago
2 survive shark attacks in waters off popular South Carolina beach
Aug. 19 (UPI) -- Two swimmers survived shark attacks this week at one of South Carolina's most popular beaches, authorities said, one of whom was on vacation with her young grandson.
Advertisement