Gorsuch: Supreme Court not going back to 'horse and buggy days'

"I am daunted sitting here under the lights. ... We are trying to interpret the law faithfully," judge Neil Gorsuch said Wednesday.

Supreme Court nominee Neil M. Gorsuch with his wife Marie Louise on the third day of his confirmation hearing before the Senate Judiciary Committee on Capitol Hill on Wednesday. Photo by Kevin Dietsch/UPI | License Photo

March 22 (UPI) -- Supreme Court nominee Neil M. Gorsuch wouldn't take the nation's top appellate bench -- or the nation, for that matter -- back to the days before LGBT and female Americans were afforded equal protection under the law.

President Donald Trump's appointee to fill the Supreme Court's vacant ninth seat said as much Wednesday during Day 3 of his Senate confirmation hearing.

Some critics have expressed concern about Gorsuch's judicial record and his ability, if the time comes, to stand up to the president on matters of national importance. Tuesday, the Colorado-based 10th Circuit Court judge sought to reassure the Senate Judiciary Committee that he feels no pressure to fall in line with Trump's ideologies. Wednesday, he aimed to assuage the panel on equal rights.

"You are a self-professed originalist in your constitutional interpretation ... focusing backward and not forward," Sen. Dianne Feinstein, D-Calif., the panel's ranking member, said, asking Gorsuch if he agreed with the opinion of late justice Antonin Scalia that "originalism" means there is no protection for women, and the lesbian, gay, bisexual and transgender communities in the 14th Amendment, which guarantees equal protection under the law.

"It would be a mistake that originalism turns on the secret intents of the drafter of the language of the law," he continued. "What a good judge always strives to do .. is try to understand what the words on the page mean, not import words that come from us. ... It matters not a whit that the drafters of the 14th Amendment were racists, because they were, or sexists, because they were."

The amendment, adopted after the Civil War in 1868, has been one of the most litigated parts of the U.S. Constitution. It's been at the center of a number of historically significant Supreme Court cases, including Roe v. Wade (abortion) in 1973, Brown v. Board of Education (segregation) in 1954 and Obergefell v. Hodges (same-sex marriage) in 2015.

Gorsuch called the provision "maybe the most radical guarantee in all of the Constitution, and maybe all of human history.

"It's a fantastic thing," he said.

Feinstein expressed concern for the possibility of regressing on certain issues, like abortion and equal rights for women.

"I want your two daughters to have every opportunity they possibly could have, to be treated equal," she told Gorsuch. "You are pivotal in this."

"Senator, I understand your concern and I share it," he replied. "I am daunted sitting here under the lights. ... No one is looking to return us to horse and buggy days. We are trying to interpret the law faithfully."

"I follow the law," he said Tuesday. "It's not a matter of agreeing or disagreeing, senator, respectfully, it's a matter of it being the law. And my job is to apply and enforce the law." 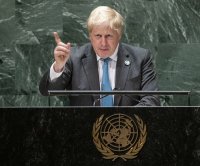 U.S. News // 18 hours ago
Democrats pass bill to raise debt ceiling, fund government
Sept. 21 (UPI) -- House Democrats passed a bill Tuesday to keep the federal government running and suspend the debt ceiling past the 2022 midterms but Republicans are holding firm against it.

U.S. News // 12 hours ago
Asteroid 3 times taller than Niagara Falls to zip past Earth on 1st day of fall
Astronomical autumn kicks off on Wednesday afternoon, and the start of the new season will coincide with an asteroid larger than the Statue of Liberty swinging past the Earth.