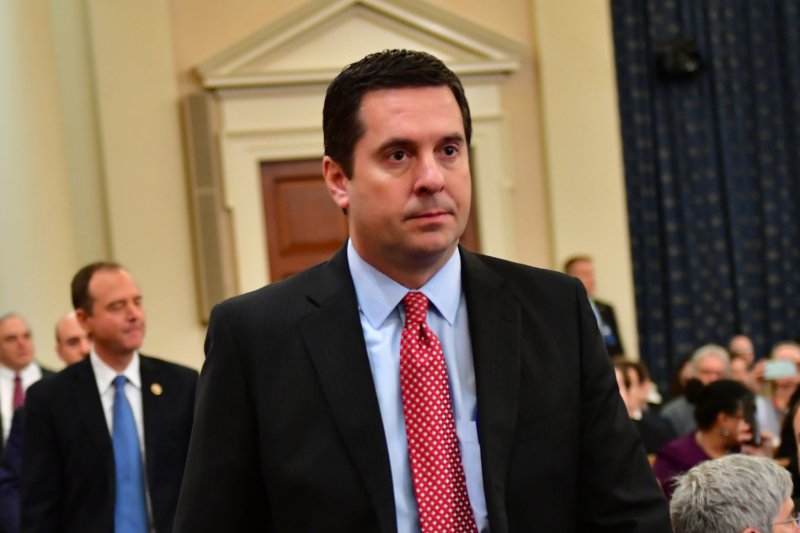 March 22 (UPI) -- As part of a broad collection effort, U.S. intelligence operatives gathered information on members of President Donald Trump's transition team for at least three months after he was elected, a top Republican House committee chairman said Wednesday -- a disclosure that might now backfire on the lawmaker.

Rep. Devin Nunes, R-Calif., told reporters he has seen intelligence reports acknowledging surveillance of Trump's transition team was done "incidentally" -- and "legally" -- in the months after his election.

Nunes said word of the surveillance came after he made a request for information as part of the House Intelligence Committee's investigation of accusations by Trump this month that his New York City headquarters was wiretapped by former President Barack Obama's administration.

"While there was not a physical wiretap in Trump Tower, I was concerned that other surveillance activities were used against President Trump," Nunes, the committee's chairman, said. "On numerous occasions the intelligence community incidentally collected information about U.S. citizens involved in the Trump transition."

The president's accusations of listening devices planted in the Manhattan office building have yet to be corroborated, but current and former law enforcement and intelligence officials -- including FBI Director James Comey, NSA chief Mike Rogers and former National Intelligence Director James Clapper -- have discredited them.

Trump and the White House, however, insist the allegations are legitimate.

Last summer, the FBI began investigating the possibility the Russian government was running interference on the U.S. presidential election in an effort to defeat Democratic nominee Hillary Clinton, who was purportedly out of favor in the Kremlin.

As part of the investigation, and other standard efforts the United States performs to keep tabs on Russia, surveillance was conducted on certain Moscow officials near the end of 2016 -- including conversations in December between eventual national security adviser Michael T. Flynn and Russian diplomat Sergey I. Kislyak. Those discussions ultimately led to Flynn's firing.

This week, Comey confirmed the bureau's investigation has since expanded to include whether any member of Trump's campaign cooperated with Moscow in their efforts.

But Nunes said Wednesday that the information collected on the transition team was not part of those surveillance practices.

"I want to be clear -- none of this surveillance was related to Russia or the investigation of Russian activities or of the Trump team," Nunes, a Trump supporter, said. "The House Intelligence Committee will thoroughly investigate surveillance and its subsequent dissemination to determine a few things."

Nunes said his committee wants to know who had knowledge of the surveillance, who authorized it, why Congress wasn't made aware of it, and whether it was surveillance specifically aimed at Trump's team. A main goal of the inquiry, the chairman added, is to determine whether any regulations or procedures were violated after the intelligence was gathered.

The GOP lawmaker said he has asked the FBI, NSA and CIA to aid in the review.

Nunes said it's not yet known if communications from Trump himself were involved in the collection.

Later Wednesday, Nunes began to come under fire from other lawmakers about his handling of the situation.

Sen. Ron Wyden, D-Ore., a member of the Senate Intelligence Committee, said late Wednesday that Nunes may have given out classified information by communicating the information to reporters.

"Nunes' statements would appear to be revealing classified information and that obviously would be a very serious concern," he said. "With respect to the substance of the claim, I don't have any idea what he is talking about."

Rep. Adam Schiff, D-Calif., also a member of Nunes' intelligence committee, said he has "grave" concerns about the way his fellow Californian handled the wiretapping investigation and Wednesday's disclosures.

"I have expressed my grave concerns with the chairman that a credible investigation cannot be conducted this way."

"You would think if that was the case there would be -- unless he is divulging some kind of confidential information only he has -- I have not been briefed on this yet," Sen. Mark Warner, D-Va., the top Democrat on the Senate Intelligence Committee, said.

"I don't know what he's saying," Sen. Lindsey Graham, R-S.C., added. "I would like to know more about what he's saying, but incidental collection is not equivalent to government-directed surveillance of an American citizen."

During a meeting Wednesday with the Congressional Black Caucus, Trump said he feels "somewhat vindicated" by Nunes' remarks.

White House press secretary Sean Spicer repeatedly said during his news briefing Wednesday that the White House didn't have any idea what the details of Nunes' findings were.

"He actually went down and spoke to the media before he shared this with us," Spicer said, noting that Nunes was set to brief the president in the afternoon.

"Didn't we already know there was incidental collection of intelligence involving some members of the transition team?" one reporter asked, citing the intercepts involving Flynn's talks with Kislyak.

"You have questioned us every day about what we knew and now you're coming back to me and saying, 'didn't we already know this?' So I guess we are doing somewhat of an effective job," Spicer answered. "Let's wait and see how this unfolds."

U.S. News // 13 hours ago
Protesters gather across U.S. in wake of Tyre Nichols beating video
Jan. 28 (UPI) -- Protesters took to the streets in cities across the country on Friday following the release of video of the beating of Tyre Nichols by Memphis police officers on Jan. 7. Nichols died three days later.

U.S. News // 15 hours ago
2 Memphis-area deputies under investigation after release of Nichols footage
Jan. 28 (UPI) -- Two Tennessee sheriff's deputies who were at the scene of the fatal police beating of Tyre Nichols in Memphis are under investigation in connection with the incident, officials said.