Trump promises review of Obama regs to boost MPG for U.S. vehicles by '25

"Stop acting like climate change is a hoax and taking our country back decades by gutting environmental protections," Vermont Sen. Bernie Sanders said of Trump Wednesday.

President Donald Trump walks across the South Lawn of the White House toward Marine One on Wednesday as he departs for a trip to Detroit, where he said his administration will review looming federal guidelines that aim to boost average fuel economy for American-made vehicles to 54.5 MPG by 2025, as an environmental measure. Pool Photo by Olivier Douliery/ UPI | License Photo

March 15 (UPI) -- During a visit to the nation's automotive capital Wednesday, President Donald Trump said his administration will review -- and possibly revoke -- looming federal guidelines that aim to ramp up the fuel economy of American vehicles within the next decade.

Trump delivered a speech at the American Center for Mobility at Willow Run in the Detroit suburb of Ypsilanti Wednesday afternoon. In his remarks, the president said he will revive a mid-term review process that had been scheduled for the coming regulations.

The rules, submitted by former President Barack Obama's government in 2011, mandate an increase in fuel economy for all domestic vehicles to an average of 54.5 miles per gallon by 2025. The aim of the regulations is to curb greenhouse gases and was considered a major action in the former president's commitment to combat climate change.

Trump, who's been accused of climate change skepticism, made his message on the matter simple -- if the issue boils down to carbon emissions versus American jobs, he's picking the jobs.

"[Reviewing the rules is] necessary because the standards were set far into the future," Trump said in Ypsilanti, saying Obama rushed the regulations onto the books. "If the standards threaten auto jobs, then common sense changes could have -- and should have -- been made."

The rules call for dramatic increases to fuel economy between 2021 and 2025 -- changes that many in the auto industry have said will be difficult to achieve and take a substantial investment due to the need to speed up development of clean vehicle technologies. 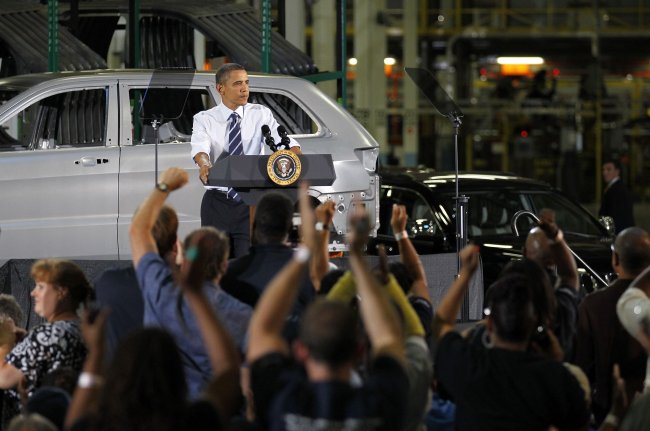 Former president Barack Obama delivers an address to workers and guests at a Fiat Chrysler assembly plant in Detroit in 2010. A year later, he announced rigorous new federal regulations to increase average fuel economy for American-made vehicles to more than 50 MPG by the year 2025 -- rules intended to combat climate change by limiting carbon emissions on U.S. roads. File Photo by Brian Kersey/UPI

Environmentalists responded with criticism, saying no amount of money is worth irreparably harming the planet.

"Car companies have lobbied Trump for months to roll back clean car standards, putting profits ahead of the health of people and planet, and this is the result," Greenpeace USA spokesman Charlie Cray answered Wednesday. "Trump campaigned on a promise to cut corporate lobbying, but today's announcement unmasks another empty promise to American voters."

"Stop acting like climate change is a hoax and taking our country back decades by gutting environmental protections," Vermont Sen. Bernie Sanders told Trump in a tweet.

"Making a U-turn on fuel economy is the wrong way to go for our security, our economy and our environment," Sen. Ed Markey, a staunch environmental advocate, said. "[Trump] is waging a war on the environment and he wants Scott Pruitt to make our strong fuel economy emissions standards his latest victim."

"We're going to bring a lot of jobs back to Michigan and Ohio and Pennsylvania," the president said.

Since taking office, Trump has often stated a desire to return Detroit to its glory days of American auto-making, once chiding Toyota for plans to build a manufacturing plant in Mexico instead of the United States. Four days after Trump was inaugurated, Toyota announced it would add 400 jobs to an Indiana plant and make a $600 million investment there.

U.S. News // 51 minutes ago
Colorado blasted with late-spring snowfall
As of Saturday morning, locales across Colorado were covered in snow, receiving more than a foot of snow amid plummeting temperatures.

U.S. News // 4 hours ago
Biden signs $40B Ukraine aid package
May 21 (UPI) -- President Joe Biden on Saturday signed a law providing $40 billion in additional aid and equipment to Ukraine to fend off the Russian invasion, the White House announced.

U.S. News // 14 hours ago
Fake heiress Anna Sorokin debuts prison drawings while in ICE custody
May 20 (UPI) -- Anna Sorokin, the convicted scammer who pretended to be an heiress named Anna Delvey, has unveiled a pop-up show of her prison drawings made while in the custody of U.S. Immigration and Customs Enforcement.

U.S. News // 17 hours ago
Captured fugitive Casey White ordered to give DNA sample
May 20 (UPI) -- An Alabama inmate who escaped custody with the help of a former corrections officer and was recaptured after a 11-day manhunt has been ordered to provide a DNA sample to prosecutors.

U.S. News // 18 hours ago
Damaging tornado tears through northern Michigan
Heavy damage has been reported in Gaylord, Mich., after a large and extremely dangerous tornado was spotted in the area.