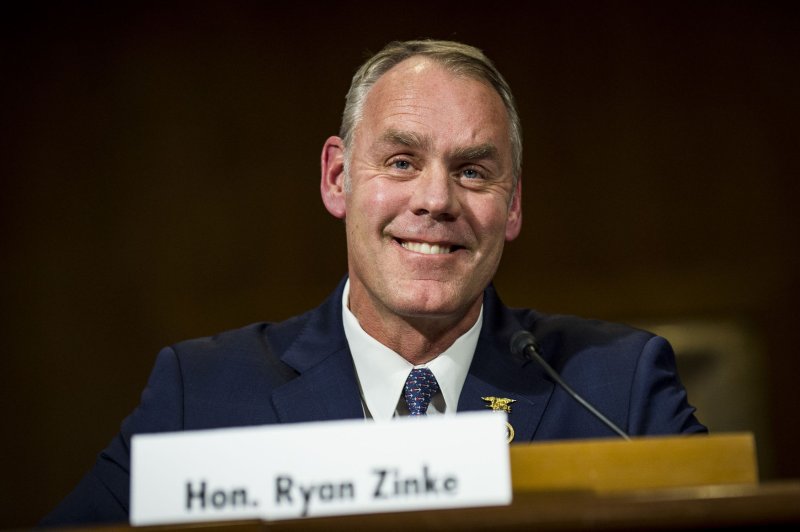 Rep. Ryan Zinke, R-Mont., testifies before the Senate Committee on Energy and Natural Resources during his confirmation hearing as secretary of the interior on January 17. The Senate approved his nomination Wednesday by a 68-31 vote. File Photo by Pete Marovich/UPI | License Photo

Seventeen Democrats in the Senate joined Republicans in voting to approve him.

Zinke, R-Mont., said during confirmation hearings that he agreed that the climate is changing, although the scope of involvement by humans is debatable, a position favored by several of President Donald Trump's nominees for Cabinet positions. Zinke clearly rejected, though, to a comment of Trump's that climate change is a hoax.

He also ruled out the sale of federal lands, but said he would review limits on oil and gas drilling in Alaska that were imposed by President Barack Obama's administration.

As interior secretary, Zinke, 55, a former Navy SEAL and fifth-generation Montanan, will oversee the agency in charge of one-fifth of the nation's land through bureaus dealing with national parks, wildlife refuges, hydroelectric dams, tribal lands and territory with resources, including oil. The position will require a careful balance between protection of land with Trump's stated eagerness to increase fossil fuel production, Politico reported Wednesday. It added that an end to the Interior Department's freeze on new coal leases is expected to be among Zinke's first acts: He supports additional oil and gas development on federal land, as well as additional offshore drilling in parts of the Arctic and Atlantic Oceans.

Environmental groups have been critical of Zinke's past stances favoring fossil fuel development and opposing endangered species protections. However, he has identified himself as a Teddy Roosevelt Republican, believing that federal land should have multiple uses where appropriate, including for energy and mineral production.

U.S. News // 28 minutes ago
Gallup: U.S. residents hesitant to return to regular activities
April 3 (UPI) -- Concern about the coronavirus is weighing heavy on U.S. residents with only 14 percent saying they would resume their daily activities if it was up to them, according to a new Gallup poll released this week.

U.S. News // 1 hour ago
Trump nominates controversial Kentucky judge for D.C. court
April 3 (UPI) -- President Donald Trump on Friday nominated Justin Walker, a Kentucky judge who was a controversial pick for the federal bench when he was appointed on a party-line vote five months ago, for a seat in Washington, D.C.

U.S. News // 3 hours ago
Stocks down on Wall Street after 2 wins, 2 losses this week
April 3 (UPI) -- U.S. stocks fell Friday after the opening bell on Wall Street, about an hour after the Labor Department reported more than 700,000 U.S. jobs were lost last month.

U.S. News // 4 hours ago
Google launches 'mobility' project that traces human activities worldwide
April 3 (UPI) -- Americans are going to places much less frequently now than they were just a month ago, according to a new mobility project from Google that traces human movements worldwide.

U.S. News // 11 hours ago
Cadaver dogs to search for Gold Rush-era graves near Oregon, Calif. trails
DENVER, April 3 (UPI) -- Researchers using cadaver dogs will sniff out 170-year-old graves in an Idaho national preserve this summer to uncover clues about pioneers who died as their wagon trains traveled the Oregon and California trails.