George Washington letter on sale of slaves up for auction

A signed letter from George Washington dated Nov. 30, 1774, details the auctioning of 90 slaves and the settling of an estate. It is among the items to be auctioned off by Cohasco, Inc. Photo by Cohasco Inc.

A reward poster for the return of three escaped slaves dated March 15, 1848, is among historic documents being auctioned by Cohasco Inc. Photo by Cohasco Inc.

Feb. 20 (UPI) -- A letter by George Washington describing the sale of 90 slaves will be auctioned off Wednesday, the birthday of the United States' first president.

The two-page letter, written in 1774, two years before the Declaration of Independence was signed, will be among approximately 400 historical documents to be auctioned off by Cohasco, Inc., of Yonkers, N.Y.

The letter describes his sale of the Virginia estate of Col. George Mercer, a friend who served under Washington in the French and Indian War.

The letter was written by Washington on the day Thomas Paine arrived in America.

RELATED Flamin' Hot Cheeto 'that looks like Harambe' sells for $99,900 on eBay

Washington ultimately ordered the emancipation of all of his slaves.

"What makes the letter historically significant is that Washington started life as a slave owner in his early teens and by about this time he began to realize that he had a conflict, an intellectual conflict," said Bob Snyder, vice president of Cohasco, to The Journal News. "On the one hand he was agitating for American independence and freedom. On the other hand he's surrounded by slaves."

The auction company also is selling an 1848 runaway slave poster offering a $250 reward for the capture and return of three black sisters named Maria, Susan and Harriet Johnson to their owner in Washington, D.C. They were caught and remained slaves until they were freed in 1864 when Abraham Lincoln's administration paid for their emancipation. This item's value is listed at $6,500 to $9,000.

Snyder said that the auction's end date was scheduled so it would fall near Presidents Day, Monday, a national holiday in the United States.

U.S. News // 1 hour ago
Trump sues Jan. 6 committee to prevent release of White House records
Oct. 18 (UPI) -- Former President Donald Trump on Monday filed a lawsuit against the House committee probing the Jan. 6 insurrection in a bid to keep it from examining White House records related to the attack. 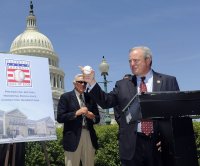 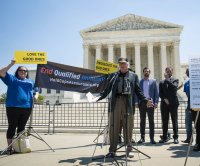 U.S. News // 6 hours ago
Supreme Court finds officers covered by 'qualified immunity' in two cases
Oct. 18 (UPI) -- The Supreme Court on Monday ruled in favor of police in a pair of cases challenging officers' right to "qualified legal immunity" from civil damages resulting from their actions.

U.S. News // 6 hours ago
Jill Biden praises Teacher of the Year winners for overcoming pandemic hardships
Oct. 18 (UPI) -- First lady Jill Biden praised teachers for battling the difficulties brought on by the pandemic as she hosted the Council of Chief State School Officers' 2020 and 2021 Teachers of the Year at the White House on Monday.
Advertisement