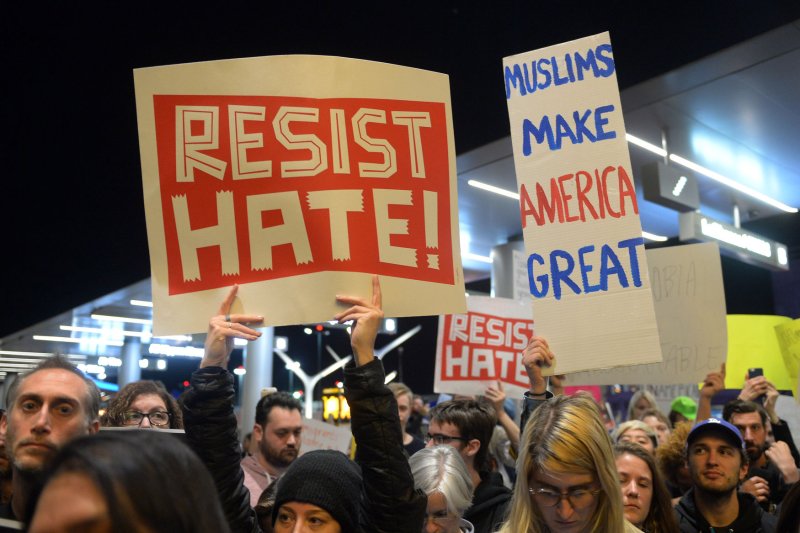 Feb. 16 (UPI) -- The Southern Poverty Law Center said the number of hate groups in the United States increased in 2016 due to a nearly 200 percent rise in anti-Muslim organizations.

In the SPLC's The Year in Hate and Extremism report, the Montgomery, Ala.,-based non-profit reported there were 917 active hate groups in the United States in 2016, compared to 892 in 2015 -- a nearly 3 percent increase.

The SPLC on Wednesday said there is one prime reason for the rise in active hate groups: Donald Trump's presidential campaign and victory.

"Trump's run for office electrified the radical right, which saw in him a champion of the idea that America is fundamentally a white man's country," the SPLC said in a statement.

"A surge in right-wing populism, stemming from the long-unfolding effects of globalization and the movements of capital and labor that it spawned, brought a man many considered to be a racist, misogynist and xenophobe into the most powerful political office in the world," the SPLC said. "Donald Trump's election as president mirrored similar currents in Europe, where globalization energized an array of extreme-right political movements and the United Kingdom's decision to quit the European Union."

"One thing seems certain. The radical right is feeling its oats today in a way that few Americans can remember," the SPLC said. "There are very large numbers of Americans who agree with its views, as sanitized under the deceptive Alt-Right label, although many of them may be less visible than before because they are not affiliated with actual groups. Whether or not the movement grows in coming years, it seems indisputable that its views have a better chance to actually affect policy now than in decades."

U.S. News // 10 minutes ago
Remains of missing teen Brittanee Drexel found after 2009 spring break killing
May 16 (UPI) -- Authorities in South Carolina found the remains of Brittanee Drexel, a 17-year-old New Yorker who was raped and killed while visiting Myrtle Beach for spring break in 2009.