"We are getting such praise for our [border security] stance, and it's a stance of common sense," Trump said Monday. 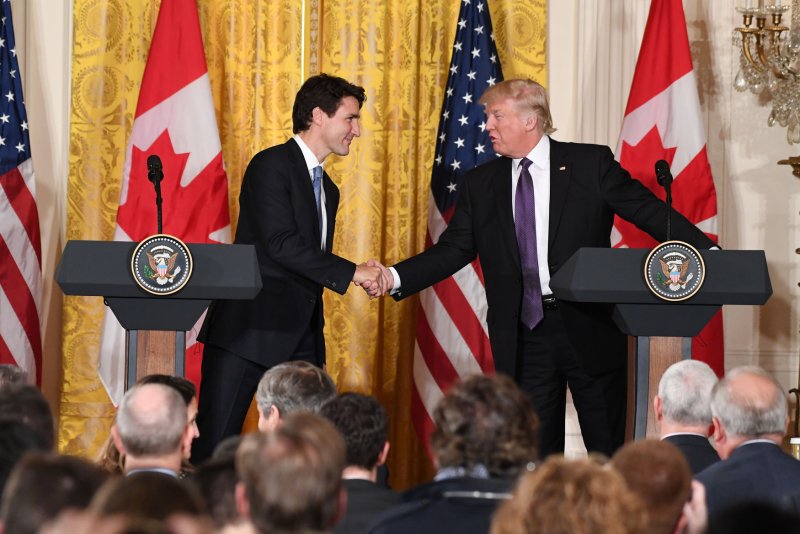 President Donald Trump shakes hands with Canadian Prime Minister Justin Trudeau during a joint press conference Monday in the East Room of the White House. The leaders spoke on a number of issues, including U.S.-Canada relations, trade and the Syrian refugee crisis. Photo by Pat Benic/UPI | License Photo

Canadian Prime Minister Justin Trudeau speaks during a joint press conference Monday in the East Room of the White House. The leaders spoke on a number of issues, including U.S.-Canada relations, trade and the Syrian refugee crisis. Photo by Pat Benic/UPI | License Photo

President Donald Trump speaks at a joint press conference with Canadian Prime Minister Justin Trudeau (not shown) in the East Room of the White House on Monday. Photo by Pat Benic/UPI | License Photo

Feb. 13 (UPI) -- President Donald Trump continued on Monday to welcome a parade of world leaders to the White House -- this time rolling out the red carpet for Canadian Prime Minister Justin Trudeau.

Monday's visit was Trudeau's first under Trump's administration and the two leaders discussed a variety of topics.

The pair acknowledged during a joint news conference in the afternoon that they share philosophies on several issues and plan to work to advance those interests.

"It is my honor to host such a great friend, neighbor and ally at the White House, a very special place," Trump said. "Our two nations share much more than a border."

"Any day I get to visit our southern neighbors is a good day in my book," Trudeau said.

The leaders were questioned about the issue of trade 22 years after the North American Free Trade Agreement was implemented by President Bill Clinton's administration -- a pact that Trump has promised to renegotiate. The American president reiterated that he wants to make the pact work better for the United States.

"We have a very outstanding trade relationship with Canada. We will be tweaking it, we will be doing certain things that are going to benefit both of our countries," he said. "We will coordinate closely to protect jobs in our hemisphere."

Trudeau, who made some of his remarks in French, echoed Trump's remarks and lauded "groundbreaking economic partnerships" between the two nations.

"Our communities rely on each other for security, stability and economic prosperity," he said. "Thirty-five states list Canada as their largest export market and our economies benefit from the over $2 billion in two-way trade that takes place every singe day."

Trump and Trudeau also adddressed immigration and security amid a legal battle in the United States over Trump's executive order to temporarily bar U.S. travel for certain immigrants and refugees.

While the controversial order was not mentioned specifically, Trump alluded to northern security and "safe and responsible cross-border travel" between the United States and Canada in his comments -- but said the situation on the southern border is a completely different scenario.

"On the home front, we have to create borders. We have to let people who love our country in ... we want to have a big, beautiful open door," the president said, answering a question on national security. "We cannot let the wrong people in. And I will not allow that to happen during this administration.

On Thursday, a federal appeals court ruled against the order and said an injunction blocking it could remain in place while the issue is fully evaluated by lower courts. That ruling followed another days earlier that also upheld a restraining order against the president's directive.

"We are getting such praise for our stance, and it's a stance of common sense," Trump said of his border security efforts.

"We won by a very, very large electoral college vote. I knew that was going to happen. I knew that this is what people were wanting."

"Security and immigration need to work very well together," Trudeau added, saying he and Trump are "very much in agreement" on maintaining national security.

Trump also said that North Korea is one of the largest threats to the world, and that his administration will deal with Pyongyang "very strongly."

Before their news conference, Trudeau and Trump met with a group of women business leaders and agreed to create a U.S.-Canadian "council for the advancement of women entrepreneurs and business leaders."

The Canadian leader also said the two agreed to address the problem of opioid drugs crossing the border.

U.S. News // 1 hour ago
FDA expands hand sanitizer danger list to more than 100 products
Aug. 4 (UPI) -- The Food and Drug Administration has updated its list of recalled hand sanitizers, warning that it's found some of the products with potentially toxic methanol don't list it on the bottle. 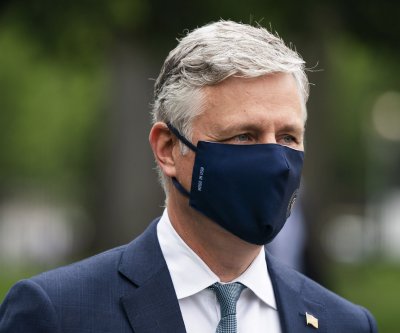 U.S. News // 2 hours ago
Ruling allows Sikh student's bullying suit to proceed
Aug. 4 (UPI) -- A lawsuit is moving forward against a New Jersey high school over a Sikh student's claims that he was bullied and subjected to slurs over his faith and South Asian heritage.

U.S. News // 4 hours ago
Helicopter crashes into Tennessee River; 1 dead
Aug. 4 (UPI) -- Investigators are trying to determine what caused a helicopter to crash into the Tennessee River, killing one person on board.

U.S. News // 5 hours ago
Ford President, CEO Jim Hackett to retire in October
Aug. 4 (UPI) -- Ford President and CEO Jim Hackett, who has led the company since 2017, will retire this fall and be succeeded in the posts by Chief Operating Officer Jim Farley, the automaker announced Tuesday.