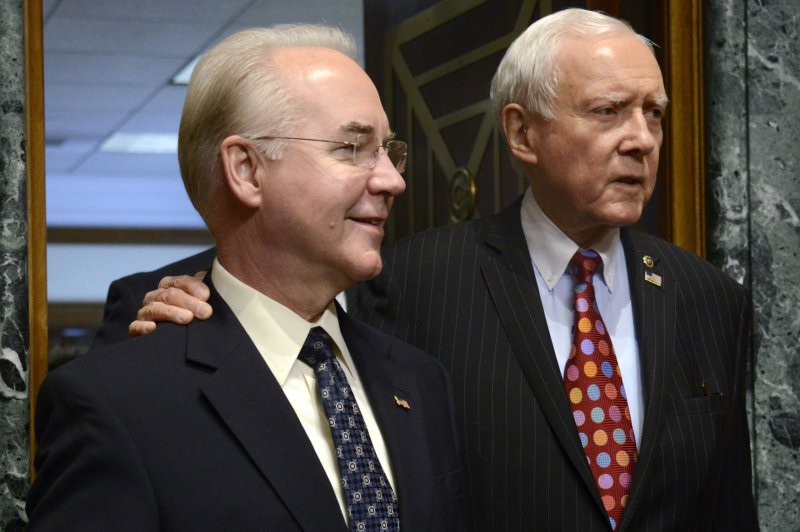 Feb. 1 (UPI) -- Republican Senate committees on Wednesday approved three of President Donald Trump's Cabinet nominees -- two of whom were confirmed despite a boycott by Democrats.

The Senate Judiciary Committee voted 14-9 along party lines to confirm the nomination of Jeff Sessions as attorney general. A full Senate vote on Sessions could occur as early as next week.

Republicans on the Senate Finance Committee approved the nomination of Steven Mnuchin to become Secretary of the Treasury and Georgia Rep. Tom Price to become secretary of the Department of Health and Human Services. The committee's actions will send the process to the Senate, which will vote in full on whether to confirm the nominees.

After Democrats boycotted the Senate Finance Committee meeting for a second day, Republicans on Wednesday changed a rule requiring at least one Democrat be present for the panel to hold a valid vote to send the nomination process to the Senate floor.

Chairman Orrin G. Hatch, R-Utah, said the decision was carried out under "extraordinary circumstances" and was approved by the Senate parliamentarian.

The 14 Republicans on the committee voted to advance the nominations of Mnuchin and Price to the full Senate.

"They on their own accord refused to participate in the exercise," Hatch said of the absentee Democrats on the committee. "They have nobody to blame but themselves."

Sen. Tim Scott, R-S.C., on Twitter said his "friends on the left have decided political stunts are more important than showing up for work."

U.S. News // 17 hours ago
Southern Baptist Convention reveals Justice Department investigation for sexual abuse
Aug. 12 (UPI) -- The leaders of the Southern Baptist Convention, the largest protestant denomination in the United States, revealed Friday that the church is being investigated for sexual abuse by the Justice Department.

U.S. News // 18 hours ago
Wisconsin state assembly fires 2020 election investigator after Trump fallout
Aug. 12 (UPI) -- Robin Vos, the Republican speaker of Wisconsin's state assembly, announced Friday that he had fired the man he had hired to investigate false claims of voter fraud in the state.

U.S. News // 1 day ago
Author Salman Rushdie stabbed before speech, rushed to hospital
Aug. 12 (UPI) -- The man who allegedly stabbed international novelist Salman Rushdie during an event in western New York on Friday has been identified by police as Hadi Matar.

U.S. News // 1 day ago
House passes Inflation Reduction Act on Friday, sends it to Biden's desk
Aug. 12 (UPI) -- The House is expected to pass the Inflation Reduction Act Friday, almost a week after the Senate narrowly approved the legislation that aims to invest billions in climate change, tax and other economy-oriented efforts.
Advertisement