Cincinnati declares itself a sanctuary city for undocumented immigrants 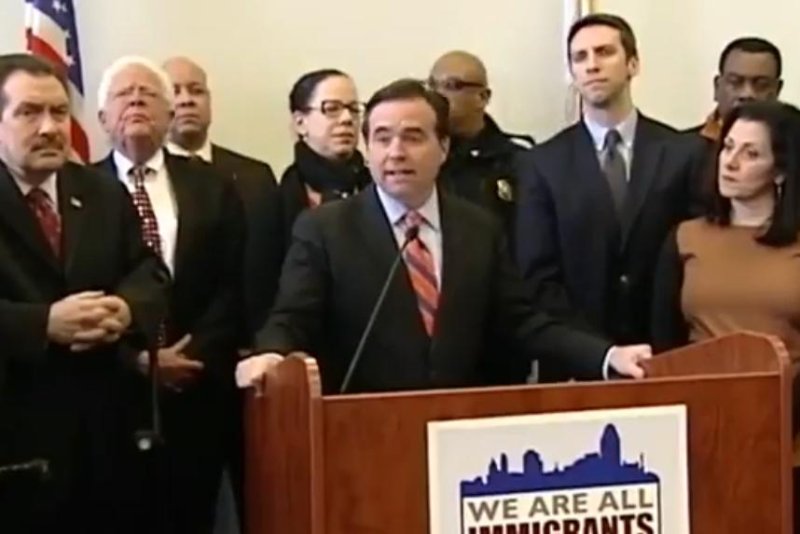 Cincinnati Mayor John Cranley, at podium, announces that his city will remain a sanctuary city -- it's police officers do not enforce federal immigration law because its "not our role" -- despite President Donald Trump's threats to withdraw federal funding from cities not enforcing the laws. Photo by WLWT-TV

Jan. 30 (UPI) -- While some cities are backing off their status as "sanctuary cities" since President Donald Trump threatened to pull federal funding from them, at least one has opted to go all-in since the announcement.

Cincinnati Mayor John Cranley on Monday announced at a press conference that his city was officially designating itself a sanctuary city, saying police officers there will continue to not enforce federal immigration laws.

Cranley said he does not believe Trump would pull federal funding from the city if it does not cooperate with immigration officials, which federal law does not require municipal agencies to do regardless.

"We have put the whole world on notice that we intend to live up to the Statue of Liberty ideals," Cranley said, adding that Cincinnati "has been for years and will remain a sanctuary city."

Two types of sanctuary cities exist: Those where law enforcement does not cooperate with immigration officials, and those that avoid any type of proactive immigration enforcement. Cincinnati, which is the latter, helps federal agencies when asked to, but does not check automatically people's immigration status and likely would not start checking if asked to do so, officials say.

"We don't proactively seek out people who are undocumented or are over-staying their visas," said Steve Saunders, a spokesperson for the Cincinnati Police Department. "That's not our role."

City Councilman Charlie Winburn said he was concerned about the sanctuary city designation, saying he is "not interesting in putting federal funding for Cincinnati in jeopardy. I also don't want to make the jobs of our police officers any harder."

U.S. News // 5 hours ago
Christie's auctions 'Birth of Wikipedia' items, including NFT of 1st edit
Dec. 6 (UPI) -- Christie's this week is conducting an online auction entitled "The Birth of Wikipedia" in which a non-fungible token, or NFT, of the site's first edit is being offered for sale.