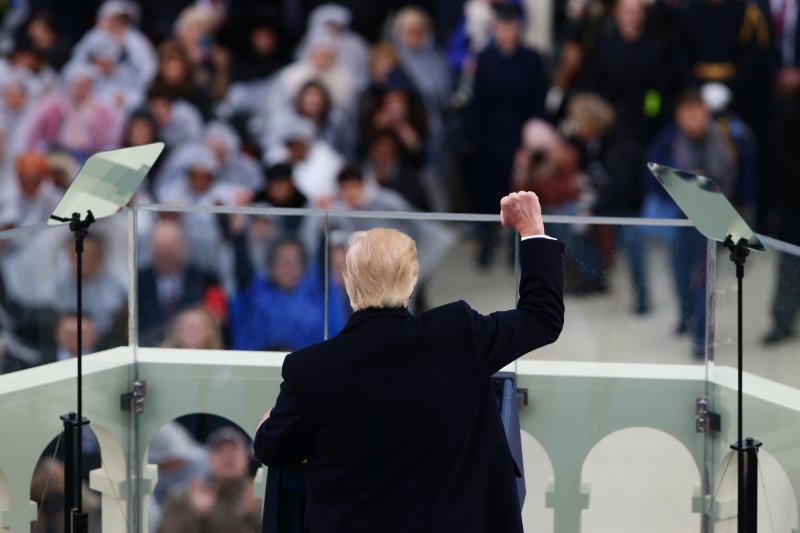 President Donald Trump delivers his inaugural address at Friday's ceremony at the U.S. Capitol in Washington, D.C. Not long after he took office, his government announced it would suspend a scheduled mortgage insurance premium cut that was ordered by former President Barack Obama's administration last week. Photo by Georges De Kerlee/UPI | License Photo

Jan. 20 (UPI) -- One of the first orders of business for President Donald Trump's administration on Friday was to suspend a scheduled insurance rate cut for new homeowners, which was set by Barack Obama's government earlier this month.

The proposed cut would have reduced annual insurance premiums for new Federal Housing Administration loans, closed after Jan. 26, by 25 basis points -- from 0.85 to 0.60. The move was hailed by some experts concerned about rising insurance rates for homeowners.

The Obama administration ordered the reduction on Jan. 9.

However, the U.S. Department of Housing and Urban Development, now under Trump's control, said Friday that the premium cut has been "suspended indefinitely."

The department, which will be headed by Ben Carson if he's confirmed by the Senate, did not give a reason for scrapping the rate cut.

Some experts say Trump's administration may simply be holding off on the insurance cut so it can weigh its full impact.

"Given that lenders have already started preparing for the [rate] decrease, it is important that any new policy be implemented in a way that minimizes disruption for borrowers and lenders," David Stevens, president and CEO of the Mortgage Bankers Association, said.

Critics, though, are concerned that this may be the first of many negative changes on Trump's agenda.

"This action is completely out of alignment with President Trump's words about having the government work for the people," a spokesman for John Taylor, president of the National Community Reinvestment Coalition, said Friday. "Exactly how does raising the cost of buying a home help average people?"

The insurance rate reduction would have saved new FHA-insured homeowners an average of $500 on premiums this year.

U.S. News // 4 hours ago
Oklahoma schedules 25 executions to begin in August
July 1 (UPI) -- An Oklahoma court on Friday scheduled the executions of 25 men over the next two and a half years, cases that the prisoners' lawyers say "exemplify systemic flaws" in the state's use of the death penalty.

U.S. News // 6 hours ago
Biden predicts states will ban women from traveling for abortion
July 1 (UPI) -- President Joe Biden on Friday predicted some states will try to prevent women from crossing state lines to seek an abortion but pledged to protect women's rights to travel to seek such services.

U.S. News // 8 hours ago
Iowa family sues amusement park in death of 11-year-old in 2021
July 1 (UPI) -- The family of an 11-year-old Iowa boy who died when an amusement park ride malfunctioned nearly a year ago filed a lawsuit against the park and its managers on Thursday.
Advertisement