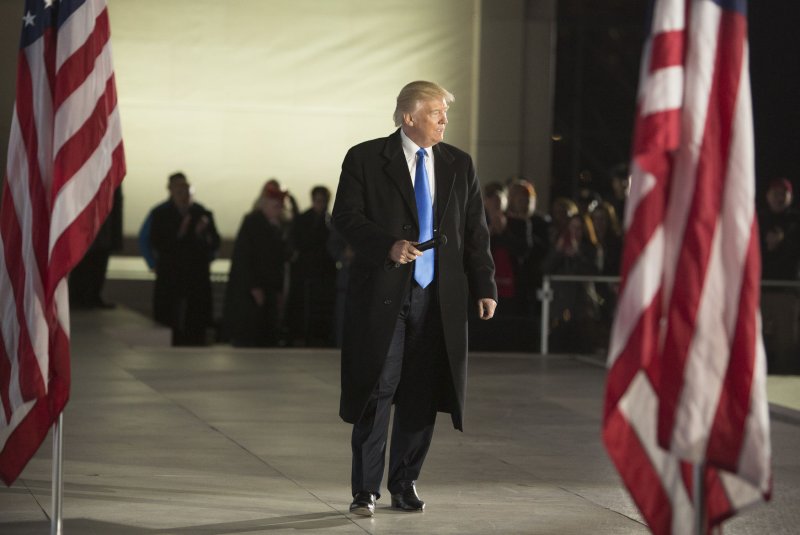 President-elect Donald J. Trump makes remarks at the "Make America Great Again" Welcome Celebration concert at the Lincoln Memorial in Washington, D.C., on Thursday. Out of all of Trump's campaign promises, modernizing the U.S. infrastructure is the most important to Americans, a Gallup poll shows. Trump will be inaugurated on Friday. Pool Photo by Chris Kleponis/UPI | License Photo

Jan. 20 (UPI) -- Out of all the campaign promises made by President-elect Donald Trump, Americans believe the most important pledge is the revitalization of the U.S. infrastructure, a Gallup poll indicates.

The Gallup poll was conducted via telephone interviews on Jan. 9 and Jan. 10 on a random sample of up to 814 adults in the United States.

More than half of Americans also want Trump to reduce income taxes, to establish tariffs on foreign imports and to deport illegal immigrants who committed crimes. About a quarter of Americans want Trump to withdraw from the Trans-Pacific Partnership and to build a wall along the U.S. border with Mexico.

Last week, Elaine Chao, Trump's pick to serve as the next secretary of transportation, said she hopes to improve the lives of Americans by modernizing infrastructure.

"The Department of Transportation has a key role to play in modernizing our transportation systems, strengthening our country's competitiveness, and improving our quality of life," Chao said in opening remarks at her confirmation hearing. "I look forward to working with you to rebuild, refurbish and revitalize America's infrastructure, so our economy can continue to grow, create good paying jobs for America's working families and enhance our quality of life."

The full Gallup results, including the percent of Americans who told Gallup keeping the pledge is "very important," are as follows:

5. Repeal and replace the Affordable Care Act, or Obamacare, 46 percent.

8. Renegotiate NAFTA or withdraw from the agreement, 40 percent.

11. Withdraw from the Trans-Pacific Partnership, 26 percent.

12. Build a wall along the border with Mexico, 26 percent.

13. Require that for each new federal regulation, two must be eliminated, 23 percent.

U.S. News // 1 hour ago
As low-end wine prices fall, premium varieties likely won't budge
EVANSVILLE, Ind., Feb. 21 (UPI) -- If you're a connoisseur of fine wine, don't expect to get the same price breaks that are starting to appear among cheaper varieties.

U.S. News // 7 hours ago
Poll: 77% of Americans confident government can handle coronavirus outbreak
Feb. 20 (UPI) -- A Gallup poll found that 77 percent of Americans were confident in the federal government's ability to handle an outbreak of the coronavirus, which is known officially as COVID-19.