The review will include the FBI's decision a week before the election to announce potential new evidence in the Hillary Clinton email case. 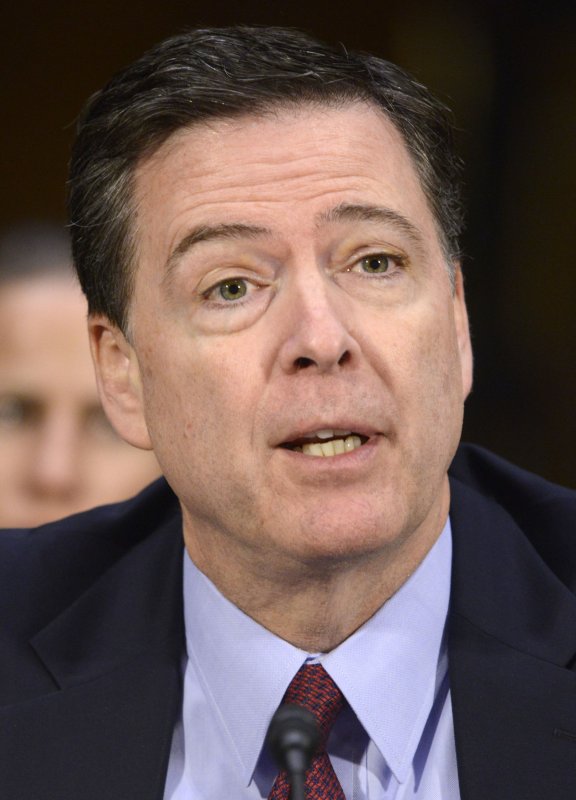 FBI Director James Comey speaks before the Senate Select Committee on Intelligence on Capitol Hill Tuesday. Comey is at the center of a forthcoming investigation by Justice Department Inspector General Michael Horowitz, announced Thursday, into the bureau's actions in the months leading up to November's presidential election. Comey publicized potential new evidence in the Hillary Clinton email case 11 days before the vote. Photo by Mike Theiler/UPI | License Photo

WASHINGTON, Jan. 12 (UPI) -- The inspector general at the U.S. Department of Justice said Thursday he will investigate the department and the Federal Bureau of Investigation to determine whether they violated policy with their actions in the final months before November's presidential election.

Democrats criticized FBI Director James Comey for his part in the controversy -- announcing potential new evidence related to the Hillary Clinton email investigation about a week before the vote on Nov. 8.

On Thursday, Justice Department Inspector General Michael Horowitz said his inquiry will focus on whether the bureau's actions violated DOJ or FBI policy. Inspectors general at the department almost never publicize their investigations.

RELATED November: Clinton on FBI email examination: 'There is no case here'

Comey, a Republican-turned-Independent, said he made the new evidence public in the interest of transparency -- but because he didn't disclose many details, Democrats feel it delivered a knockout blow to Clinton at the worst possible time.

Two days before the election, Comey announced that the renewed inquiry -- which focused on a laptop belonging to former Rep. Anthony Weiner, who was married to a Clinton aide -- had turned up nothing new. Democrats, though, said substantial damage had already been done.

Less than 48 hours later, Trump was declared the 45th president of the United States -- thanks to narrow victories in several battleground states, including Wisconsin and Michigan, which hadn't voted Republican for more than 30 years.

The Office of the Inspector General said its review will not supersede the FBI's conclusion in the case, that Clinton should not face criminal charges for the handling of her private email server while secretary of state.

"The review will not substitute the inspector general's judgment for the judgments made by the FBI or the Department regarding the substantive merits of investigative or prosecutive decisions," Horowitz's office said in a statement. "If circumstances warrant, the OIG will consider including other issues that may arise during the course of the review."

Democratic presidential nominee Hillary Clinton gives her concession speech on Nov. 9, 2016, at Manhattan's New Yorker Hotel after losing the election to Donald Trump. Clinton's campaign and several Democrats later pinned some of the blame for the defeat on FBI Director James Comey's decision to publicize the existence of potential new evidence in the former secretary of state's email investigation. File Photo by Olivier Douliery/UPI

White House spokesman Josh Earnest said Thursday that President Barack Obama was not involved in Horowitz's decision to open the inquiry. The inspector general, a former Democratic supporter who donated to Clinton when she was a senator for New York, was appointed to the post by Obama in 2011.

"Hopefully they will follow the evidence where it leads," he added.

Obama, who appointed Comey to his post, criticized the FBI director for his actions in October. Some lawmakers alleged Comey had violated the Hatch Act, a federal law that bars government officials from influencing an election.

It was later revealed that several Justice Department officials advised Comey against announcing the Clinton inquiry so close to the election. They argued that the act ran contrary to department tradition of withholding announcements involving political candidates within 30 days of an election -- a stipulation that exists specifically to avoid making an adverse impact on the vote.

Comey himself acknowledged the tradition in an internal memo to FBI employees.

"We don't ordinarily tell Congress about ongoing investigations, but here I feel an obligation to do so given that I testified repeatedly in recent months that our investigation was completed," he wrote. "I also think it would be misleading to the American people were we not to supplement the record."

Former Justice Department spokesman Matthew Miller said at the time that Comey's actions may be unprecedented.

"[This] disclosure might be worst abuse yet. DOJ goes out of its way to avoid publicly discussing investigations close to election," he said in a tweet. "This might be totally benign and not even involve Clinton. But no way for press or voters to know that. Easy for opponent to make hay over."

For about a year, the FBI investigated Clinton's use of a personal email server while she was Obama's State Department head to determine whether any classified information had been sent or received on the unsecure account.

In July, Comey announced that nothing illegal involving Clinton had been uncovered, and Attorney General Loretta Lynch said the case would be closed without charges.

Horowitz's investigation will also evaluate concerns by Republicans that a department liaison passed on nonpublic information to Clinton's campaign before the election, and that FBI Deputy Director Andrew McCabe should have been removed from the case due to pre-existing political ties to Clinton.

U.S. News // 22 minutes ago
Study: Social media companies failed to remove 84% of antisemitic posts
Aug. 2 (UPI) -- Five of the largest social media sites, including Facebook and Twitter, failed to remove 84% of antisemitic posts including Holocaust denial, conspiracy theories and neo-Nazi imagery, according to a report Monday.

U.S. News // 1 hour ago
MGM Resorts donates land for permanent Las Vegas shooting memorial
Aug. 2 (UPI) -- MGM Resorts is donating land in Las Vegas for the construction of a memorial to the hundreds of people who were killed or injured in the 2017 mass shooting in the city, local officials announced Monday.

U.S. News // 12 hours ago
White House urges landlords to hold off on evictions as moratorium ends
Aug. 2 (UPI) -- The Biden administration scrambled on Monday to stave off an expected nationwide wave of COVID-19 related evictions, urging landlords hold off for 30 days as financial help makes it way to strapped tenants.