Investigators concluded "with high confidence" that Russia interfered, and that Vladimir Putin directly ordered it.

WASHINGTON, Jan. 6 (UPI) -- Russian President Vladimir Putin had a direct hand in ordering, in behalf of Moscow's government, a large-scale effort to interfere in the U.S. presidential election -- in an attempt to get Donald Trump in the White House and sully the image of Hillary Clinton, an unclassified intelligence report said Friday.

The office of the director of national intelligence released the highly-anticipated report on Friday, which followed a classified version being given to President Barack Obama Thursday and President-elect Donald Trump Friday.

For weeks, U.S. intelligence officials have implicated the Russian government in a series of cyberattacks before the Nov. 8 vote. Friday's 25-page report showed investigators concluded "with high confidence" that not only did Russia's government interfere, but that Putin directly ordered it to do so. It also says agents of the Kremlin also employed third parties to impact the vote -- including the Moscow-funded network RT and "trolls" on social media channels.

"We assess Russian President Vladimir Putin ordered an influence campaign in 2016 aimed at the US presidential election," the report states. "Russia's goals were to undermine public faith in the US democratic process, denigrate Secretary Clinton, and harm her electability and potential presidency.

"We further assess Putin and the Russian Government developed a clear preference for President-elect Trump. We have high confidence in these judgments."

The report said both the CIA and FBI were highly confident in the conclusions implicating the Kremlin, and the National Security Agency was moderately confident.

Authorities in the report expressed alarm at the brazenness of Russia's purported involvement, saying its efforts "demonstrated a significant escalation in directness, level of activity, and scope of effort compared to previous operations."

The report bolstered its conclusions by citing Russia's track record of ordering covert actions related to American elections, which dates back decades to the former Soviet Union and the Cold War.

"In the 1970s, the KGB recruited a Democratic Party activist who reported information about then-presidential hopeful Jimmy Carter's campaign and foreign policy plans, according to a former KGB archivist," it noted.

Intelligence officials said Russia will likely use the lessons it learned from Trump's election to try and influence elections in the future.

Included in Friday's report is the claim that the U.S. intelligence community intercepted communications from Moscow in November that revealed high-level Russian officials celebrating Trump's win and congratulating themselves -- a development first reported late Thursday.

"Further information has come to light since Election Day that, when combined with Russian behavior since early November 2016, increases our confidence in our assessments of Russian motivations and goals," the report says.

Three top intelligence officials testified in the Senate Thursday and defended their claims of Russian complicity.

Russia had been suspected in multiple cyberattacks last year against Democratic targets, including the Democratic National Committee, that officials believe were motivated by a desire to obtain and expose information embarrassing to Clinton.

"When it appeared to Moscow that Secretary Clinton was likely to win the election, the Russian influence campaign began to focus more on undermining her future presidency," the report added.

While the report accuses Russia of direct interference with the cyberattacks, it said there was no evidence that Moscow tampered, or even attempted to alter, the vote tally.

Trump has expressed great skepticism about Russia's potential involvement in the election. Friday, he took aim at the news media for a report that was published before he was briefed on the investigations.

"I am asking the chairs of the House and Senate committees to investigate top secret intelligence shared with NBC prior to me seeing it," he tweeted.

U.S. News // 2 hours ago
3 in Georgia court Thursday to face charges in Ahmaud Arbery killing
June 4 (UPI) -- Three men charged in the killing of Ahmaud Arbery will appear in court in Georgia for a preliminary hearing on Thursday.

U.S. News // 3 hours ago
Garcetti: LAPD budget to be cut by $150M to fund programs in black communities
June 4 (UPI) -- Los Angeles Mayor Eric Garcetti announced that up to $150 million will be cut from the L.A. Police Department as part of relocating some $250 million from the city's budget to funding programs in communities of color. 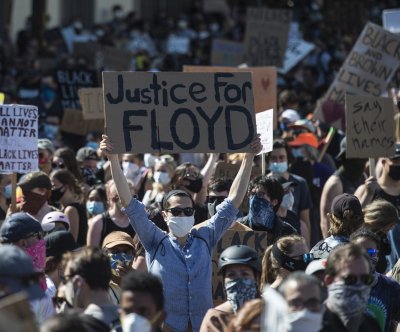