The plane was attempting to arrive at the Spruce Creek Fly-In, a residential community with its own landing strip, when it crashed.

Although the identities of the two aboard the 2009 single-engine Epic LT were not immediately confirmed by the Volusia County Sheriff's Office, the plane was registered to Daryl Ingalsbe, CEO of Independent Technologies Inc., a company headquartered in Blair, Neb., with offices in the Minneapolis area. An obituary in the Omaha World-Herald Thursday said Ingalsbe "passed away in a plane crash."

Ingalsbe has homes in Spicer, Minn., and the Spruce Creek Fly-In, a residential neighborhood in Florida catering to pilots.

The New London-Spicer School District confirmed that Deb Solsrud, who was involved in the activities of the school district, was the other person aboard the plane, TwinCities.com reported Wednesday.

Ingalsbe and Solsrud took a 21-day trip around the world together in an experimental plane in July, the Daytona Beach News-Journal said Wednesday.

A 911 caller said the plane entered a thick fog and entered "an inverted flat spin" as it approached the airport Tuesday evening.

"The airplane is not considered to be flying at that point," he said.

The fog affected arrivals and departures at the nearby, and larger, Daytona Beach International Airport that evening.

The plane left the airport in Willmar, Minn., on Tuesday morning and traveled to Cleveland, Tenn., before heading to Florida. It crashed on the lawn of a home in the Spruce Creek Fly-In community. Nine aircraft-related fatalities have been reported at the Fly-In since 1993, FAA records indicate.

U.S. News // 1 hour ago
U.S. set to carry out 6th federal execution of year
Sept. 22 (UPI) -- The U.S. government on Tuesday is set to execute a former U.S. soldier who killed a Georgia nurse after a federal appeals court denied his request for a stay of execution and a new trial.

U.S. News // 10 hours ago
Powell, Mnuchin promise economic support, push more action by Congress
Sept. 22 (UPI) -- The Federal Reserve will continue to support the domestic economy through the COVID-19 pandemic, following up on some improvement since the start of the crisis, Chairman Jerome Powell said.

U.S. News // 2 hours ago
CDC: Americans were more likely to cooperate with contact tracing before COVID-19
Sept. 22 (UPI) -- Contact tracers in two North Carolina counties have struggled to get COVID-19-positive patients to cooperate with investigations, the U.S. Centers for Disease Control and Prevention said in a report released Tuesday.

U.S. News // 12 hours ago
U.N. General Assembly: Trump blames China, WHO for COVID-19 crisis
Sept. 22 (UPI) -- In a recorded address Tuesday at the 75th U.N. General Assembly, U.S. President Donald Trump slammed China for its response to COVID-19 in the early weeks of the pandemic.

U.S. News // 4 hours ago
CBO: U.S. deficit could see historic levels by 2050 without spending cuts
Sept. 22 (UPI) -- The United States will need to cut spending by at least $900 billion per year over the next few decades to restore the national deficit to its 2019 level, according to a report by the Congressional Budget Office. 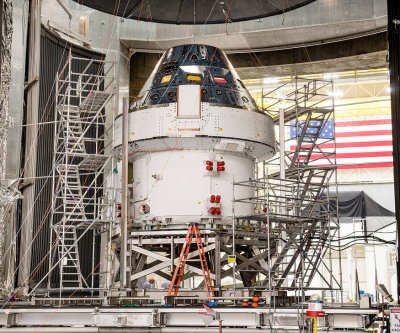 U.S. News // 5 hours ago
NASA reveals new details of $28B Artemis lunar landing program
Sept. 22 (UPI) -- NASA has released new details of its Artemis project to send astronauts to the surface of the moon by 2024, including the cost of its first phase -- $28 billion