President-elect Donald Trump said Wednesday "we ought to get on with our lives" rather than respond to covert actions Russia allegedly committed against the U.S. during the 2016 presidential election. 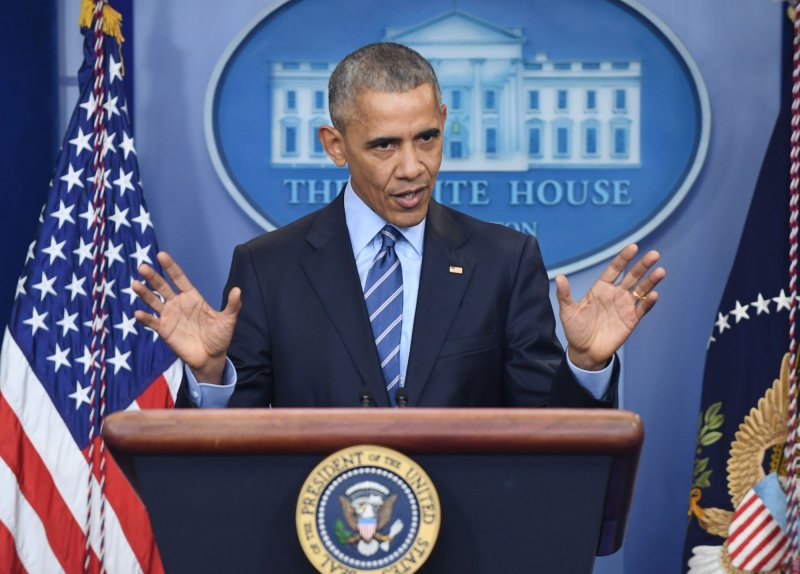 U.S. President Barack Obama, pictured at his end-of-the-year press conference at the White House on December 16, 2016, is preparing to take retaliatory measures against Russia based on accusations by the U.S. intelligence community the country was behind the theft and release of emails from several Democratic Party organizations in an effort to affect the presidential election last summer. The public portion of the measures may be announced Thursday, while some type of covert cyber action against Russia is also expected to be carried out but not announced. File photo by Pat Benic/UPI | License Photo

WASHINGTON, Dec. 29 (UPI) -- Amid an expectation the Obama administration will announce a series of actions to get back at Russian interference in the 2016 U.S. presidential election, President-elect Donald Trump suggested he'd rather move on and forget about it.

President Barack Obama is expected to announce on Thursday public elements of a retaliation at Russia for its role in hacks during the election, and make vague reference to covert action of some sort, but Trump said late Wednesday he thinks a response is unnecessary and the focus should be on better security to prevent hacks in the first place.

Russian officials, including Russian President Vladimir Putin himself, have denied accusations by the U.S. intelligence community that they were behind hacks of Democratic National Committee and other Democratic Party-related servers, which resulted in the theft and release of thousands of emails in an effort affect the election.

"I think we ought to get on with our lives," Trump said during remarks to reporters Wednesday night at his Mar-a-Lago estate in Florida. "I think that computers have complicated lives very greatly. The whole age of the computer has made it where nobody knows exactly what's going on. We have speed, we have a lot of other things, but I'm not sure we have the kind of security we need."

Obama warned in his weekly radio address on Dec. 16 that some type of response was on the way, but said it may or may not be made public.

With an announcement possible for Thursday, administration officials say the public part of the response is likely to include sanctions and diplomatic censure.

There is likely to also be some sort of covert cyber action, officials say, and the administration is looking to be careful to get its point across while not starting a cyber war with Russia.

U.S. News // 13 hours ago
Texas inmate executed after delay over religious rights
Oct. 5 (UPI) -- Texas death row inmate John Henry Ramirez, who won a delay from the Supreme Court last year on religious grounds, was executed on Wednesday after a judge rejected a prosecutor's request to cancel the execution.

U.S. News // 4 hours ago
Fugitive claiming to be Harvard-educated billionaire arrested in $35M fraud scheme
Oct. 5 (UPI) -- Alleged fugitive Justin Costello, who claimed to be a Harvard-educated military veteran, was arrested in a scheme to defraud thousands of investors out of $35 million, according to the U.S. Attorney's Office.

U.S. News // 6 hours ago
Education Department: Student loan forgiveness could cost $305B over 10 years
Oct. 5 (UPI) -- The Department of Education said Wednesday that President Joe Biden's order to cancel student loan debt for millions of Americans could cost an average of $30 billion per year over the next decade.

U.S. News // 8 hours ago
FBI: Murder rate, other violent crime stayed flat in 2021
Oct. 5 (UPI) -- Violent and property crime remained steady in the United States throughout 2021 after a significant spike in the murder rate in 2020, according to new report Wednesday from the FBI.