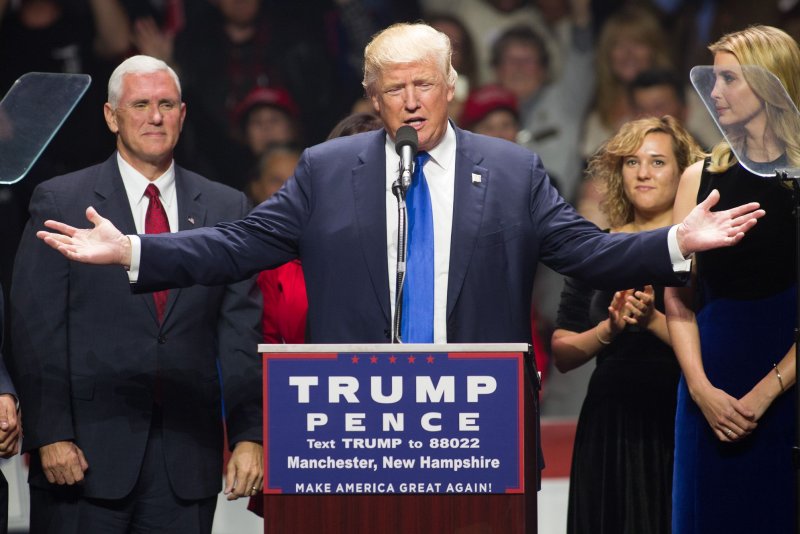 President-elect Donald Trump, seen here during a New Hampshire rally a day before the November 8 presidential election, sold all of his stockholdings in June, a Trump spokesman said Tuesday. Trump has recently been criticized over potential conflicts of interest related to his business. Photo by Matthew Healey/UPI | License Photo

NEW YORK, Dec. 6 (UPI) -- A spokesman for Donald Trump said the president-elect sold all of his stockholdings in June, which could help him avoid potential conflicts of interest.

The announcement comes after Trump on Tuesday morning said he wants to cancel the government's order for the development of a new Air Force One, citing a $4 billion cost.

After he was questioned about the Boeing deal, Trump said his administration wants Boeing -- a company he publicly held stocks in -- "to make a lot of money" but not too much.

"Well the plane is totally out of control, it's going to be over $4 billion for Air Force One program," Trump said in Trump Tower, CNBC reported. "I think it's ridiculous, I think Boeing is doing a little bit of a number. We want Boeing to make a lot of money, but not that much money."

Trump had at least two brokerage accounts that held about 150 separate corporate stock and bond investments, including for companies such as Amazon, Apple, Boeing and Visa, The Wall Street Journal reported. But Trump's spokesman, Jason Miller, said those no longer represented a conflict of interest.

"The president-elect sold all of his stock back in June," he said during a phone call with reporters.

Trump last week said he plans to leave his business "in total" in order to focus on the presidency, though he is not "mandated under law" to do so. The president-elect has been questioned since winning the presidency over potential conflicts of interest with his expansive business empire. One of Trump's options is to put his assets into an independent blind trust but he will hold a press conference on Dec. 15 to announce his solution.

U.S. News // 22 hours ago
Biden speaks on human rights at rededication of Dodd Center in Conn.
Oct. 15 (UPI) -- President Joe Biden decried the state of human rights across the globe Friday while attending a rededication ceremony honoring former Sen. Chris Dodd at the University of Connecticut.

U.S. News // 22 hours ago
Parkland school gunman Nikolas Cruz to change plea to guilty on all charges
Oct. 15 (UPI) -- The man who killed 14 students and three staffers in the Parkland school shooting attack three years ago will plead guilty to charges of first-degree murder in a bid to escape the death penalty, attorneys said Friday.