White House: Women should be required to register for the military draft

Women are unlikely to be required to register for Selective Service any time soon as it would require an act of Congress, and Republicans generally oppose the idea. 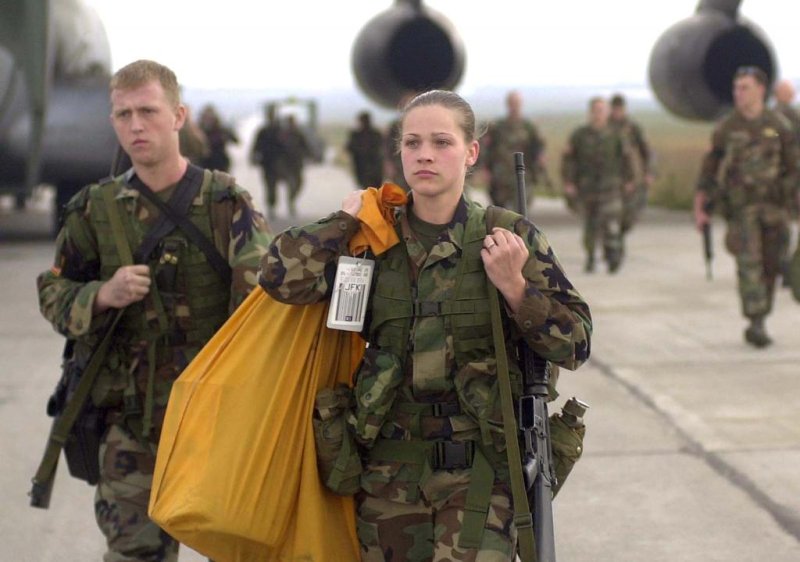 The White House announced support for women to be required to register for Selective Service when they reach age 18, the same as men are required to, as part of the military's continued moves to equalize opportunity and treatment of men and women. The military has only recently allowed women to serve in all combat roles -- which was not true when the female U.S. Marine pictured above landed in Kosovo in 2001. Photo by Valdrin Xhemaj/European Pressphoto Agency

WASHINGTON, Dec. 2 (UPI) -- In a move continuing efforts to equalize men and women in the U.S. armed forces, the White House announced support for requiring women to register for the draft -- even though there is currently no military draft and it is not expected to be reinstated any time soon.

President Barack Obama, as well as the Pentagon, on Wednesday announced their support for a universal requirement to register for selective service, which follows years of moves to open all manner of positions in the armed forces to women. Earlier this year, the ban on all combat roles was lifted, opening hundreds of thousands of jobs to women.

"The act of draft registration has long served as a powerful reminder to our nation's youth that public service is a valued part of American citizenship," Ned Price, spokesman for the National Security Council, said in a statement. "And as old barriers for military service are being removed, the administration supports -- as a logical next step -- women registering for the Selective Service."

The announcement is symbolic because the United States currently employs an all volunteer military and in order for the change to happen Congress would have to change law, which is unlikely to happen.

The Senate approved a version of the National Defense Authorization Act in June that included a requirement for women to register with Selective Service when they turn 18, but the House later voted to strip the provision and it is not expected to be included on any version of the bill sent to the president for approval.

While some current military commanders support equality throughout the military, many do not, suggesting the possibility that even the ability of women to serve in ground combat units could potentially be repealed by President-elect Donald Trump.