Trump, Carrier to announce deal to keep 1,000 jobs in Indiana 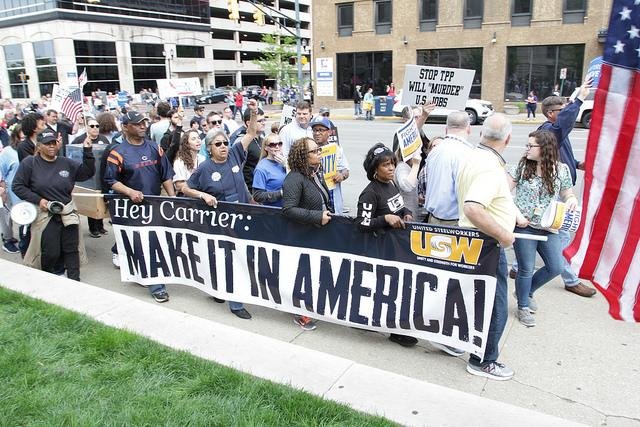 Carrier Corp. and President-elect Donald Trump's administration announced a deal Tuesday that will keep the company's manufacturing facilities in Indianapolis, preventing at least 1,000 jobs from being moved to Mexico -- a proposal members of the United Steelworkers protested at the Indiana State Capitol in April. The deal was negotiated by Vice President-elect Mike Pence and makes good on Trump's campaign promise to try to prevent the company from moving the facilities out of the United States. Photo by United Steelworkers/Flickr.com

INDIANAPOLIS, Nov. 29 (UPI) -- While the details of a deal are not clear, President-elect Donald Trump appears to have started to make good on one of his most-repeated campaign promises -- to stop companies from shipping manufacturing jobs out of the United States.

Carrier and the Trump administration negotiated a deal to keep 1,000 of the 1,400 jobs in Indianapolis that it had been planning to move to a new factory in Mexico, with at least some of the deal including monetary incentives from the state of Indiana to stay there.

Trump spoke extensively during the campaign about preventing jobs from leaving the U.S., focusing on an announcement by Carrier to move some of a heating and air conditioning production facility to Mexico as an example of the problem.

"We are pleased to have reached a deal with President-elect Trump and VP-elect Pence to keep close to 1,000 jobs in Indy," Carrier posted on Twitter after word of the deal was leaked to the media. "More details soon."

RELATED Dozens arrested across U.S. calling for $15 minimum wage on 'Day of Action'

The deal was negotiated by Vice President-elect Mike Pence and Greg Hayes, CEO of Carrier parent company United Technologies. There was speculation the deal may have been made easier by the fact that Pence is still governor of Indiana and in a position to offer the company incentives not to move.

The plan to move some of Carrier's manufacturing to Mexico was purely an economic decision, the company said, but some say threats from Trump about how companies that move jobs out of the United States would be treated by his administration may have also played a role in the company's change of heart.

Trump and Pence are expected to appear in Indiana Thursday to celebrate the deal.

U.S. News // 19 hours ago
Dreary weather to persist across Northeast
April 11 (UPI) -- After recently enjoying warm spring weather, the Northeast is moving into a dreary and stormy pattern to end the weekend.

U.S. News // 20 hours ago
Iowa State officer killed trying to arrest armed, barricaded man
April 11 (UPI) -- Sgt. Jim Smith, a 27-year veteran of the Iowa State Patrol, was shot and killed attempting to apprehend a man who barricaded himself inside his home after assaulting another Iowa law enforcement officer.