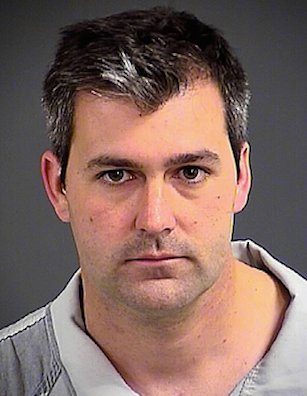 Former South Carolina police Officer Michael Slager is facing a murder charge in the death of Walter Scott, who was shot while fleeing from Slager after a traffic stop in North Charleston on April 4, 2015. On Tuesday during testimony, Slager said he made the decision to use deadly force against Scott before Scott began running away. Scott was shot multiple times in the back about 18 feet from where Slager opened fire. Photo courtesy of Charleston County Detention Center

Slager's defense has argued the shooting of Scott was justified because Scott got control of Slager's Taser during a confrontation and tried to use it against the officer. Fearing that Scott could get his pistol by using the Taser, Slager acted in self defense, the defense said.

On Tuesday, Slager, who has used a Taser in 13 out of 18 use-of-force incidents in the past four years, said Scott remained a threat to his life even as Scott was 18 feet away when he was running before he was shot and even as Scott had Slager's cartridge-less Taser in his hand, which is a disputed fact as neither the prosecution nor the defense have successfully determined the circumstances surrounding the use and location of the Taser.

During cross-examination, Slager said he made the decision to use deadly force before Scott began running away because Scott "never stopped" during the alleged physical confrontation between the men.

Slager said the prosecution's comment that Scott "never at any point ... had any kind of tactical advantage over you at all" was "correct."

Slager said he had not received de-escalation training prior to the incident with Scott. The former officer said "things could have been different" with the benefit of hindsight and after seeing the video of the shooting.

"We were rolling around on the ground fighting, and I don't remember everything that happened," Slager said. "I was in total fear that Mr. Scott didn't stop and continued to come towards me. At that time, I pulled my firearm and I pulled the trigger ... I fired until the threat was stopped like I am trained to do."

Slager is facing a murder charge in the death of Scott, who was shot while fleeing from Slager after a traffic stop in North Charleston on April 4, 2015. Slager faces from 30 years to life imprisonment if convicted.