"Donald Trump suffers from a very serious disease called amnesia. He seems to have forgotten 8 years ago we were losing 800,000 jobs a month," Bernie Sanders said Friday.

Democratic presidential candidate Hillary Clinton pauses during a speech at Heinz Field in Pittsburgh, Pa., on Friday. Earlier, the U.S. Department of Labor released its October jobs report, which said 161,000 jobs were created for the month -- bringing the total since 2010 to 15.5 million. Many analysts expect the positive report to give at least a slight boost to Clinton's White House bid. Photo by Archie Carpenter/UPI | License Photo

WASHINGTON, Nov. 4 (UPI) -- The final look at the American labor market before Tuesday's election could give Democratic presidential candidate Hillary Clinton an important boost as she crosses the finish line.

The U.S. Department of Labor released its October jobs report on Friday, which said 161,000 jobs were added for the month -- upping the grand total of non-government jobs created this decade to 15.5 million.

The Labor Department's top official said in a news release Friday, titled "October Jobs Report Shows How Far We've Come," said the report reflects the consistent and solid gains in the United States since the country emerged from the Great Recession that bit at the start of President Barack Obama's presidency.

"We are in the longest streak of overall job growth on record," Labor Secretary Tom Perez said in a statement, also noting that the unemployment rate has also fallen below the 5 percent-mark.

"Americans have been waiting for a meaningful raise for too long, and today's report confirms what we've seen over the last year -- that they are getting one," he added. "Wages are up 2.8 percent over the last 12 months, the largest increase since the Great Recession, and the current pace of wage growth is even faster."

Friday's report is the last major snapshot of the domestic economy's health before President Obama's successor is chosen -- and the results are at least somewhat favorable to Hillary Clinton's bid, since she's expected to continue many of Obama's policies and philosophies, if elected.

"The data itself, it is encouraging. The economy, even this late in the cycle, is producing jobs at a solid, if unspectacular, pace," CNBC Senior Analyst Ron Insana wrote in an op-ed Friday. "Wage gains are accelerating, which is as good for Main Street as the data are good for Wall Street.

"The drop in the both narrow and broad unemployment rates give Hillary Clinton some good economic news to share only days before the presidential election."

"Not only are the quantity of jobs solid, the quality of jobs we're creating are good, middle-class jobs." -@LaborSec on today's #JobsReport

However, analysts say, that always-volatile number is not a good economic indicator because many of those leaving the aging workforce are doing so willingly, by retiring. For example, 207,000 people entered the American workforce only a month earlier, in September.

"Donald Trump suffers from a very serious disease called amnesia. He seems to have forgotten 8 years ago we were losing 800,000 jobs a month," Sanders said in a tweet.

The White House hailed Friday's report, saying the labor market is "well above the pace needed to maintain a low and stable unemployment rate" and noting the increase in wages.

"In fact, real wages have grown faster over the current business cycle than in any since the early 1970s," Obama economic adviser Jason Furman said in a statement.

"[The jobs report] was pretty positive across the board," Nationwide Insurance Chief Economist David Berson told The New York Times Friday, adding that "most importantly, we got a nice jump in average hourly earnings and that actually corresponds with other data."

Clinton urged voters on Friday to consider the progress, economic and otherwise, that has been attained by Obama's administration.

"The progress we've made under [Obama] is on the line," she tweeted. "We owe it to our kids to get out and vote."

"In the three months before he took office, the labor market shed 2.3 million private-sector jobs. The unemployment rate was 10 percent at this time in 2009," Perez added. "Thanks to the grit and determination of the American people and businesses -- coupled with wise policy decisions from the Obama administration -- our economy demonstrates its continued strength month after month." 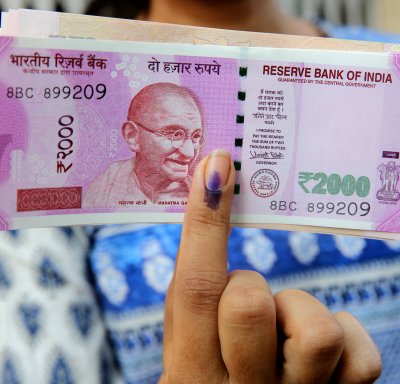