A group of pro-legalization marijuana supporters take part in a protest to urge President Barack Obama to stop marijuana arrests, pardon offenders and give greater access to medical marijuana and deschedule cannabis. On Saturday, Alaska opened its first legal pot shop, joining the ranks of Colorado, California and Oregon, who are raking in hundreds of millions of dollars on the sales. FIle Photo by Kevin Dietsch/UPI | License Photo

VALDEZ, Alaska, Oct. 30 (UPI) -- They weren't giving away marijuana, but that didn't stop dozens from lining up hours in advance for the opening of Alaska's first pot shop on Saturday.

Residents of Valdez are calling their community "the highest little town at sea level," KTVA reported.

People in Alaska see the opening of Herbal Outfitters as a historic event in their state.

Mike Holcombe was chosen to be the first inside the shop, and called the moment "monumental."

"I didn't think it would happen in my lifetime that it would be legalized," Holcombe said of his opportunity to purchase marijuana legally. "I've been waiting 46 years for pot to be legal."

It was worth the wait, said those who braved the chill and drizzling rain to encircle the store's entrance.

"We wanted to be part of the crowd that bought the first legal weed in Alaska," Christopher Front told The Alaska Journal. He traveled from Anchorage with his wife Hannah and dog, Daisy.

RELATED Congress could be changing its tune on marijuana

"She wanted to be the first dog," he added.

Herbal Outfitter manager Derek Morris said he was as surprised as anyone to learn the first shop would open in Valdez instead of in Anchorage or Fairbanks.

"We never anticipated that we'd be the first legal sale," Morris said. "That's still a little bit of a shock to us."

Valdez's previous claim to fame was as the site of the infamous Exxon Valdez oil spill. That spill funneled federal disaster relief funding into Alaska when it was undergoing an oil-driven economic recession, similar to the one Alaska has now, only worse.

Now, it is part of an industry raking in hundreds of millions of dollars in Colorado, Oregon and Washington. 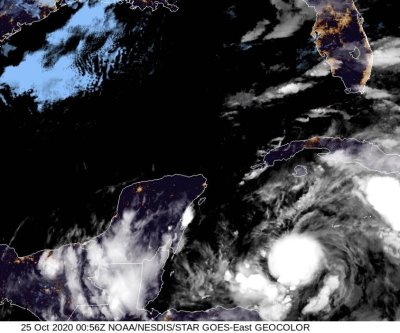