Hurricane Matthew has potential to be presidential campaign's 'October surprise' 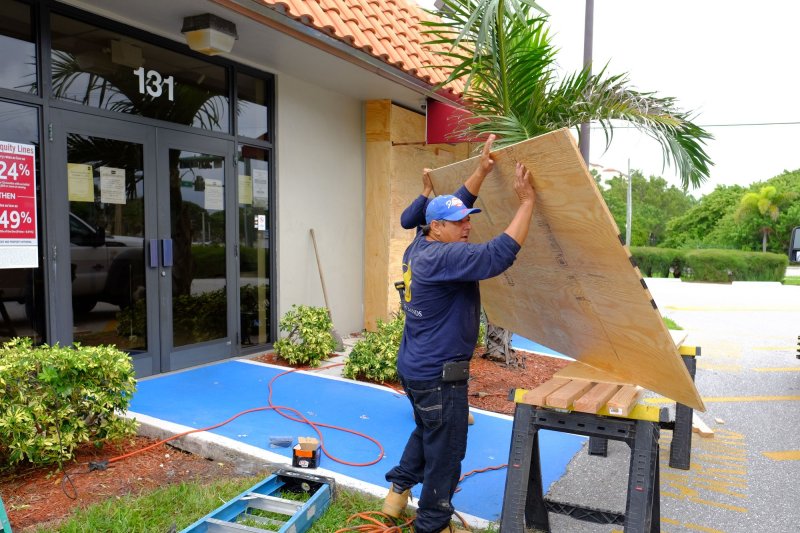 A construction crew is boarding up the glass doors at a BB&T bank branch in Lantana, Fla., on Thursday, in anticipation of Hurricane Matthew, a Category 4 storm scheduled to make landfall Thursday night. The hurricane's potential devastation could serve as the "October surprise" in the 2016 election, testing how Hillary Clinton and Donald Trump respond to a disaster. Photo by Gary I Rothstein/UPI... | License Photo

WASHINGTON, Oct. 6 (UPI) -- With Hurricane Matthew poised to blow Hillary Clinton and Donald Trump off the airwaves for what could be several days, the candidates and their supporters in the crucial swing states of Florida and North Carolina are grappling with how to respond to the storm and its aftermath.

One need not look back far in the history books to find an example of Mother Nature providing a campaign's "October surprise." In 2012, Superstorm Sandy made landfall along the Atlantic coast, hammering New Jersey, New York and parts of New England just days before voters went to the polls.

President Barack Obama was widely seen as having benefitted politically from his response to the storm. He was thrust into a leadership role, providing a powerful reminder to voters he is the nation's commander-in-chief. He was also widely recorded being the consoler-in-chief, meeting with tearful residents in the storm's aftermath, reassuring them they would have the help they needed to rebuild.

Though Sandy almost certainly had an impact on the 2012 campaign, the impact of Matthew could be entirely different. For starters, though the damage was catastrophic in some places, the areas hit by Sandy were never truly in doubt in the presidential campaign. The states chiefly affected are solid blue.

This year, arguably the two most important swing states, Florida and North Carolina, are squarely in the storm's path, creating not just a potential PR question for Clinton and Trump, but practical questions, as well.

While Election Day is still more than a month away, a crucial deadline is coming up Tuesday, which is the last day voters in Florida can register in time to cast a ballot on Nov. 8. The Miami Herald reports a major voter registration push by groups targeting minorities and college students at a busy slate of weekend sporting events is in jeopardy. Several premier college football games are in danger of being canceled depending on the severity and precise location of Matthew's landfall, expected sometime Thursday night.

Volunteers said they typically see a spike in voter registrations as the deadline approaches, but with canvassing events canceled across South Florida the fate of those efforts is unclear.

There are other practical political problems created by a disruption the size of a Category 4 hurricane. As hundreds of thousands heed evacuation orders and millions face the prospect of days without electricity or the Internet, the focus shifts to the potential for lost lives and property. It also means it could be days or weeks before pollsters are able to get a handle on how the election is going -- and with little more than four weeks to go, the campaigns could face a drastically different landscape in areas affected by the storm with little time to adjust.

How the candidates personally respond will also be a question. Unlike Obama in 2012, neither Clinton nor Trump has the advantage of incumbency. Obama's trip to the storm zone was par for the course for a presidential response to a natural disaster. Even if the timing was politically advantageous, voters generally accepted his trip there was part of the job.

Trump has a second home in Palm Beach County, Fla. -- the famed Mar-a-Lago estate across the road from the Atlantic Ocean on the island of Palm Beach. But both he and Clinton could still run the risk of appearing to exploit a tragedy for political gain if they appear too eager to arrive in the state.

Failing to respond also carries its own set of risks for the candidate, opening them up to jabs that they are too focused on winning an election to show empathy for voters who are suffering.

Both candidates felt one side of that no-win scenario earlier this summer, after devastating floods struck Louisiana.

Trump quickly arranged a tour of the affected area -- declaring it a sign of presidential leadership, to get an on-the-ground perspective. Democrats pounced, saying Trump's trip was self-serving and detracted resources from the recovery effort.

Clinton did not tour the area, citing the need for locals to focus on the clean-up, not politics -- and Republicans cast her as callous for refusing to show up.

In one early indication of the potential pitfalls of a major storm, Clinton's campaign was forced to backtrack after reports they had adjusted their media plan to maximize views of her campaign commercials in Florida. Politico reported Wednesday the campaign had added a $63,000 purchase of airtime in Florida on the Weather Channel, a network that typically sees a big spike in ratings during major weather events.

After the report became public, a Clinton spokesman confirmed the campaign had changed its mind and asked the network not to air any of her commercials until after the storm had passed.

Hurricane Matthew back to Category 4 strength as it moves through Bahamas, nears Florida UPI/CVoter state polls: Donald Trump gains support in all but 5 states

U.S. News // 16 hours ago
Florida begins rescue and recovery a day after Hurricane Ian's strike
Sept. 30 (UPI) -- Florida residents have begun the monumental task of cleaning up as the devastation left by Hurricane Ian came into focus a day after the storm slammed into the Gulf Coast and decimated large swaths of the state.

U.S. News // 9 hours ago
EPA announces cleanup of Montana Superfund site
Sept. 30 (UPI) -- The Atlantic Richfield Company has agreed to complete its cleanup of the Anaconda Smelter Superfund Site in Montana, which has suffered from severe pollution and water contamination.

U.S. News // 10 hours ago
Legionella forces personnel out of military barracks in San Antonio
Sept. 30 (UPI) -- About 150 personnel at an air force base in San Antonio are being moved due to an outbreak of Legionella, a bacteria known to cause a serious type of pneumonia called Legionnaire's Disease.

U.S. News // 11 hours ago
Navy sailor found not guilty of setting fire that destroyed ship
Sept. 30 (UPI) -- A sailor accused by the Navy of setting fire to and destroying a warship was acquitted Friday by a military judge.