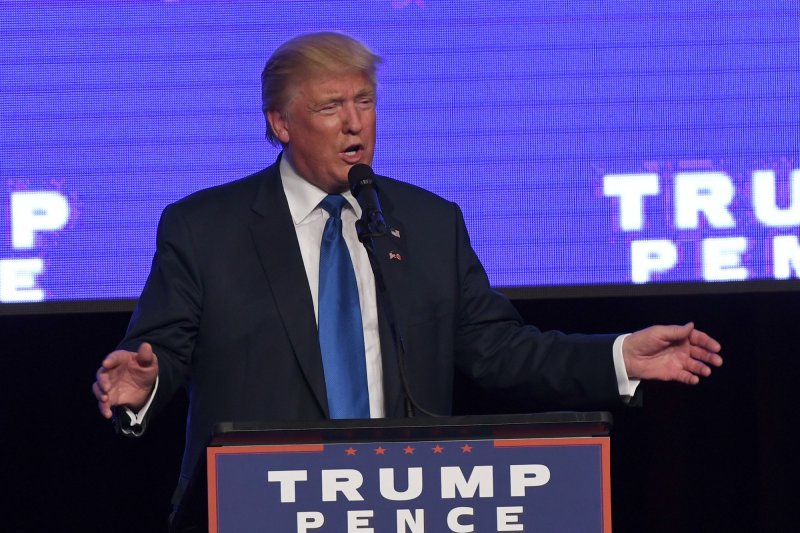 Republican presidential nominee Donald Trump speaks to supporters in Miami on Sept. 16. Trump told the audience he would keep the embargo on Cuba in place. A report Thursday in Newsweek stated Trump's hotel company paid $68,000 to explore a business venture there in 1998, a potential violation of the embargo. Photo by Gary I Rothstein/UPI | License Photo

WASHINGTON, Sept. 29 (UPI) -- Donald Trump's campaign manager downplayed an investigative report in Newsweek on Thursday that the candidate violated the Cuba embargo by spending money there in the 1990s to explore a potential real estate investment.

In the report, Trump Hotels & Casino Resorts partnered with Seven Arrows Investment and Development Corp. to explore the possibility of investing in a resort in Cuba. The report stated the group, with Trump's knowledge, spent $68,000 in 1998 to explore the business venture. Seven Arrows then reported the money was spent through a charity so it would not be seen by the federal government as violating the embargo.

Ultimately, Trump did not invest in any business in Cuba, though under U.S. law it is illegal for a U.S. corporation to spend any money on the island without approval.

Trump campaign manager Kellyanne Conway, appearing on ABC's The View on Thursday, denied Trump violated the embargo, though she did appear to acknowledge he spent money to explore the business venture.

"Read the entire story. It starts out with a screaming headline, as it usually does, that he did business in Cuba. And it turns out that he decided not to invest there. They paid money, as I understand, in 1998 -- and we're not supposed to talk about years ago when it comes to the Clintons," Conway said.

Trump has long been on record supporting the embargo. Seven months later, as he was evaluating a possible third-party presidential campaign in 1999, he spoke to a group of Cuban nationals in the United States, saying he supported keeping the embargo in place until the Castro regime left power. Earlier this month, he criticized the Obama administration's decision to re-establish diplomatic ties and end the the ban on Americans traveling to Cuba. Trump said if elected he would fully enforce the embargo unless the Cuban government ended its jailing of political dissidents, ended religious persecution and released all political prisoners.

"This latest report shows once again Trump will always put his own business interests ahead of the national interest -- and has no problem lying about it," Clinton spokesman Jake Sullivan said in a press release.

The embargo has long been a hot button issue among Florida's sizable Cuban community.

Republican presidential nominee Donald Trump supporter Jose Uz displays his "Cubans for Trump" shirt as he enters a rally in the James L. Knight Center in the Miami, Florida, September 16, 2016. Photo by Gary I Rothstein/UPI
The Newsweek report prompted Florida Sen. Marco Rubio, one of Trump's former opponents in the Republican primary, to question whether the nominee broke the law.

"This is something they're going to have to give a response to. I mean, it was a violation of American law, if that's how it happened," Rubio said on the ESPN/ABC Capital Games podcast.

Rubio, who is Cuban-American and a staunch opponent of re-establishing ties with the communist nation, said Trump must answer questions the report raised.

"I hope the Trump campaign is going to come forward and answer some questions about this, because if what the article says is true -- and I'm not saying that it is, we don't know with 100 percent certainty -- I'd be deeply concerned about it. I would," he said.

U.S. News // 1 hour ago
Attempted murder suspect on the run still using dating apps
Jan. 29 (UPI) -- A Nevada man accused of attempted murder and torturing a woman in Oregon is on the run and still active on dating sites, police say.

U.S. News // 4 hours ago
6 killed, more injured in New York bus crash
Jan. 29 (UPI) -- Six people are dead and another three are injured after a box truck and a bus collided head-on in New York.

U.S. News // 5 hours ago
Jewish family sues NYC's Guggenheim Museum seeking return of Picasso painting
Jan. 29 (UPI) -- A Jewish family has filed a lawsuit against the Guggenheim Museum in New York City seeking the repatriation of an iconic painting by Pablo Picasso that they allege was sold to allow the family to escape Nazi Germany.