A cloud of smoke rises from a fuel tank fire in an area called Ground Zero in New York City as tons of wreckage still remain, including a partial standing wall of the World Trade Center, September 17, 2001, one week after the devastating attack by outside terrorists. Photo by Chris Corder/UPI | License Photo

WASHINGTON, Sept. 11 (UPI) -- On Sept. 11, 2001, the many facets that made up daily life in the United States were forever altered. Homeland terrorism became very real, shaking the safety and protection so many Americans once felt.

Today, on the 15th anniversary of the 9/11 attacks, Americans are taking a retrospective look at the events. A total of 19 hijackers, orchestrated by al-Qaida leader Osama bin Laden and others, commandeered four commercial jetliners to slam them into the Twin Towers of the World Trade Center in New York City, the Pentagon in Washington, D.C., and a field outside Shanksville, Penn.

"Americans continue to live with the impact of Sept. 11," John Gray, director of the National Museum of American History in Washington, D.C., said. "That day marked a generation, and will forever be one of remembrance."

The following is a timeline that recalls the events and chaos of the day:

8:46 a.m. -- American Airlines Flight 11, carrying 81 passengers and 11 crew members, hits the north tower of the World Trade Center in New York City. The immediate reaction from news media and public officials is of confusion and disbelief. Early on, the news media reports it as an isolated incident by a small aircraft.

9:05 a.m. -- White House Chief of Staff Andrew Card whispers to Bush, while he is reading to the children, a second plane hit the World Trade Center.

9:31 a.m. -- Bush, in an address from the school, says the attacks were "an apparent terrorist attack" and vows to track down the perpetrators.

9:36 a.m. -- Vice President Dick Cheney and high-level aides are evacuated to a Cold War-era bunker beneath the White House. 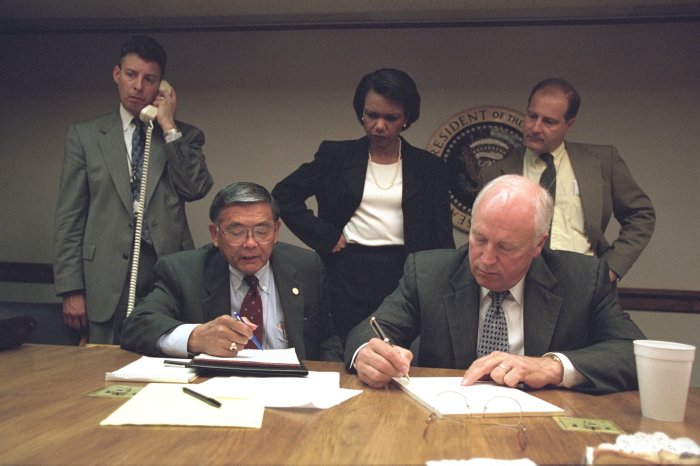 9:42 a.m. -- The Federal Aviation Administration grounds all commercial and private planes in the continental United States. Thousands of flights are redirected to the nearest airports in the United States and Canada.

9:45 a.m. -- Major buildings in Washington, D.C., including the White House, the Supreme Court and the U.S. Capitol, are evacuated. Bridges, roads and public spaces are closed.

9:54 a.m. -- Bush and his entourage leave Florida on Air Force One without a clear destination.

10:03 a.m. -- United Airlines Flight 93, traveling from Newark to San Francisco with 44 aboard, crashes near Shanksville, Penn., after passengers launch a counterattack on the hijackers.

1:04 p.m. -- Bush, at Barksdale Air Force Base in Louisiana, tells the nation the U.S. military is on high-alert status. "Freedom itself was attacked this morning by a faceless coward," he says in his address.

5:20 p.m. -- Hours after the crashes, 7 World Trade Center, located adjacent to the Twin Towers, collapses. There were no injuries.

6:58 p.m. -- Bush returns to the White House on Air Force One after detours to Louisiana and Offutt Air Force Base in Nebraska.

8:30 p.m. -- Bush addresses the nation from the White House, quoting the 23rd Psalm from the Bible and vows vengeance.

"This is a day when all Americans from every walk of life unite in our resolve for justice and peace. America has stood down enemies before, and we will do so this time. None of us will ever forget this day, yet we go forward to defend freedom and all that is good and just in our world," he says.

During the day, nations from around the world condemned the attacks. At the same time, some in the Middle East were cheering the events. Iraq blamed U.S. policies for the attacks, calling it the "the operation of the century."

"The American cowboy is reaping the fruits of his crimes against humanity," one Iraqi television station said.

Around the world, U.S. military bases, American schools and U.S. embassies closed and U.S. citizens living abroad were advised to be on the alert. Sporting events in the United States, including 15 Major League Baseball games, were postponed or canceled.

"In the interest of security and out of a sense of deep mourning for the national tragedy that has occurred today, all Major League Baseball games for today have been canceled," MLB Commissioner Bud Selig said. By the end of the day, the country was in a state of shock.

Stories of near misses and heroic actions came to the forefront. That included the story of Thomas Burnett on United Flight 93, which crashed in a Pennsylvania field. Burnett and other passengers made an attempt to take down the hijackers, and stop the plane from reaching its ultimate destination, the White House.

After Bush declared the attacks "an act of war," U.S. government and military leaders pushed for a swift and strong response. That included retired Gen. Wesley Clark, former supreme commander of NATO who led the attack on Bosnia.

"We need to pick an option and finish this fight. It's not about negotiated conflict termination. What I am hearing from the president is that we have to destroy this terrorist," Clark told UPI.

In the days that followed, U.S. leaders remained circumspect about naming the masterminds behind the attacks, but news organizations, including UPI, latched on to key figures including Osama bin Laden, the founder of al-Qaida, which ultimately claimed responsibility for the attacks. Bin Laden was killed May 2, 2011 in a U.S. Special Forces raid in Pakistan.

"Osama bin Laden is a mad dog, " UPI Chief International Correspondent Martin Walker wrote the day after the attacks. "He was a mad dog before Tuesday's attacks on New York and Washington and he will be a mad dog next week even if his latest protestations of innocence turn out to be true. He has been a mad dog since his presumptuous 'declaration of war' against the United States in August 1996."

Since 9/11, numerous investigations, including a two-year inquiry by the 9/11 Commission, have uncovered a broad interpretation of the events that led up to the attacks, but many questions remain unanswered. That includes wide speculation Saudi Arabia's government played a role. Some 28 pages of once-classified documents from the 9/11 Commission inquiry, released in July, showed ties between the Saudis and the hijackers, but no clearcut connection.

U.S. News // 21 minutes ago
Starbucks permanently pulls presence from Russia due to war in Ukraine
May 23 (UPI) -- Coffee behemoth Starbucks announced on Monday that it's exiting the Russian market -- and ending a 15-year relationship -- over the bloody war in Ukraine.

U.S. News // 19 hours ago
Ashish Jha: FDA may rule on boosters for kids under 5 in 'next few weeks'
May 22 (UPI) -- White House COVID-19 response coordinator Dr. Ashish Jha said the FDA could decide on whether to make vaccine booster shots for children younger than 5 in "the next few weeks." 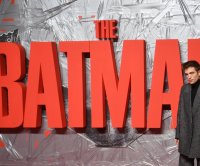