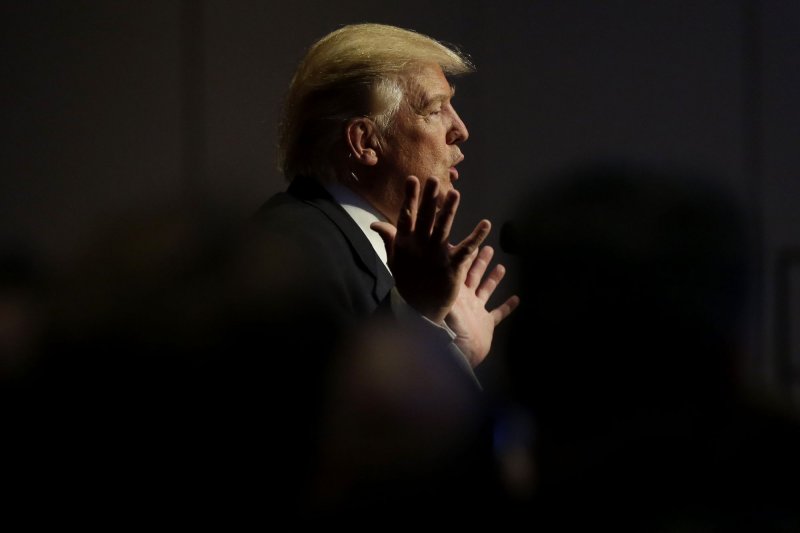 Republican presidential nominee Donald Trump proposed a $20 billion school voucher education plan on Thursday that he said would enable children in poverty to attend the school of their choice, rather than be forced to attend a failing inner-city school. Photo by John Angelillo/UPI | License Photo

Trump's plan, outlined in a four-point education policy paper, would reallocate $20 billion from existing federal spending and create block grants for states to administer, with the goal of providing direct financial aid to the estimated 11 million children living below the federal poverty level. Trump said the money should be used by states to enable students to afford tuition at private schools if the family wants to avoid sending their child to an under-performing public school. The money would also go to support students in charter schools and magnet schools.

Trump's plan does not identify what "existing federal dollars" would be re-appropriated to pay for the large education investment.

Trump's plan also calls for the institution of national merit pay for teachers to replace the tenure system, which he said rewards bad teachers with raises while failing to acknowledge teachers who exceed their peers in the classroom.

Trump's plan stops short of requiring states to use the federal dollars to institute what many have referred to as a school voucher program or do away with teacher tenure, two positions strongly opposed by most Democrats. Instead, Trump said he would use "the pulpit of the presidency" to campaign in all 50 states for his education plan.

"To achieve this long-term goal of school choice, Mr. Trump make [sic] this a shared national mission – to bring hope to every child in every city in this land. Mr. Trump will use the pulpit of the presidency to campaign for this in all 50 states and will call upon the American people to elect officials at the city, state and federal level who support school choice."

He said the details of how states would structure the grants would be their decision.

"Each state will develop its own formula, but the dollars should follow the student," Trump said.

U.S. News // 1 hour ago
Trump, Cruz and Abbott speak against gun control at NRA conference
May 27 (UPI) -- Former President Donald Trump and Sen. Ted Cruz spoke against gun control measures at a conference for the National Rifle Association held in Texas on Friday in the aftermath of the Uvalde elementary school shooting.

U.S. News // 5 hours ago
Texas Gov. Abbott says he was 'misled' on police response to Uvalde shooting
May 27 (UPI) -- Texas Gov. Greg Abbott on Friday said he was "misled" about the police response to the Uvalde elementary school shooting days after praising the response of law enforcement.

U.S. News // 6 hours ago
Jury enters deliberations in Johnny Depp, Amber Heard case
May 27 (UPI) -- A Fairfax County, Va., jury began deliberations Friday in the defamation trial between actors Johnny Depp and Amber Heard after about six weeks of testimony and accusations of abuse from both.

U.S. News // 7 hours ago
U.S. stocks break losing streaks for best week since 2020
May 27 (UPI) -- The three major stock indexes in the United States made gains this week, rebounding some from weeks of losses for the best week since November 2020.

U.S. News // 8 hours ago
JFK's 'eternal flame' persists even amid inclement weather
On a November day in 1963, Jacqueline Kennedy stood before the coffin of her late husband, lighting a torch at the head of the grave with the intention of the flame being an eternal symbol of John F. Kennedy's spirit.

U.S. News // 17 hours ago
Texas official: Waiting to engage school shooter was 'wrong decision'
May 27 (UPI) -- Texas' top law enforcement officer said Friday that police made the "wrong decision" not to immediately breach the classroom where a gunman had barricaded himself and killed 21 people.