Retired General John Allen, appearing with several veterans, addresses delegates during the Democratic National Convention at the Wells Fargo Center in Philadelphia, Pa., on July 28, 2016. Allen's name is on the list of 95 former generals and admirals who support Clinton that was released Wednesday. File photo by Pat Benic/UPI | License Photo

NEW YORK, Sept. 7 (UPI) -- Hillary Clinton on Wednesday unveiled a list of 95 retired generals and admirals endorsing her for president, one day after Republican candidate Donald Trump released a list of 88.

The former secretary of state's list include just six new names not previously announced. In its release unveiling the longer list, the Clinton campaign declared that Trump "lacks the knowledge, stability and values" to be commander in chief, and noted that 2012 Republican nominee Mitt Romney had the endorsements of 500 former military leaders.

"Clinton is getting the backing of more senior military service members and former officials with command and management experience than any non-incumbent Democrat due to her proven record of diplomacy and steady leadership on the world stage," her campaign announced.

"Given the challenges we face around the world today, and the rhetoric we are hearing from some at home, I feel I have a moral imperative to come forth and endorse Secretary Hillary Clinton for President," he said in a statement.

He added, "This is not about Democrat or Republican, this is about who is best qualified to lead the country in this complex world we live in. Hillary Clinton is the only candidate that has the experience, temperament, critical thinking and level-headed leadership to keep America safe and our partnerships strong. She has my vote in November."

On Tuesday, a group of former military leaders signed a joint letter stating Trump is the best choice for president, citing foreign policy and military failures of the Obama administration.

Also Tuesday at a speech in Greenville, S.C, Trump said that if he's elected, he will seek a plan to defeat the Islamic State from top generals within 30 days of taking office.

But his plan was immediately criticized by retired Lt. Gen. Mark Hertling, a 37-year Army veteran who told CNN, "I had to ask myself, what the hell does he think we've been trying to do for the last 14 years in terms of al-Qaeda?"

"It is unfortunate that both parties are now engaged in a sort of arms race to gather partisan endorsements from former military officials," Charles Dunlap, a retired Air Force major general and lawyer who now runs the Center on Law, Ethics and National Security at Duke University told Time magazine. "Collective partisan political activities based almost exclusively on the participants' former military affiliation are especially troubling, and inconsistent with the proper role of retired senior officers in a democracy."

On Wednesday night, the first Commander-in-Chief Forum will take place in New York City at 8 p.m. Eastern, and will be aired live on MSNBC and simulcast on NBC in most parts of the country. The two candidates will appear on stage, one after the other, and take questions on national security, military affairs and veterans issues from military veterans and active service members. The forum is sponsored by the Iraq and Afghanistan Veterans of America.

A new poll released Wednesday shows voters who are currently serving or have previously served in the U.S. military widely favor Trump over Clinton.

Trump leads by 19 percentage points -- 55 percent to 36 percent -- among 3,358 people linked to the U.S. military, according to the latest NBC News SurveyMonkey Weekly Election Tracking Poll.

A sizable number of active military personnel and veterans say they are not comfortable with the candidates acting as commander-in-chief -- 53 percent for Trump and 35 percent for Clinton.

Among voters overall on handling veterans issues, Trump fares slightly better in the poll than Clinton, 40 percent to 39 percent. Among active military and veterans, he does even better, 53 percent to 28 percent.

The tracking poll was conducted online Aug. 29-Sept. 4 among a national sample of 32,226 adults who say they are registered to vote. The margin of error is 3 percent.

U.S. News // 2 hours ago
Google to allow some coronavirus ads after broad ban
April 2 (UPI) -- Google will lift a broad ban on coronavirus advertisements, phasing in some advertisers with a priority on those working directly on the pandemic.

U.S. News // 5 hours ago
Ford follows GM, FCA in reporting 1st quarter sales drop
April 2 (UPI) -- Ford said Thursday first-quarter sales fell more than 12 percent compared to the same quarter a year ago -- a loss greater than those reported by the automaker's U.S. rivals, but less than the industry average. 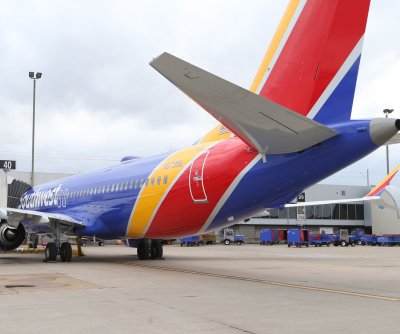 U.S. News // 7 hours ago
Coronavirus forcing a change in outreach strategy for 2020 Census
WASHINGTON, April 2 (UPI) -- Community organizers, civic engagement organizations and grass-roots groups who are pushing for greater participation in the 2020 Census have been forced to change their strategies as coronavirus paralyzes the U.S.