Trump sticks to pledge to build a border wall, whether issue of payment was discussed disputed by Mexican president

Specifically, Trump said he stood by his trademark proposal to build a wall along the U.S.-Mexican border and said the North American Free Trade Agreement must be renegotiated to end what he views as deal that has allowed U.S. manufacturing jobs to move south. And while Trump said he reiterated his intention to build a wall, he said the issue of who will pay for its construction was something "we didn't' discuss."

"That's for a later date," Trump said standing on stage with Nieto.

While Pena Nieto did not contradict Trump on stage, he took to Twitter amid heated criticism from Mexican citizens and the media over failing to challenge Trump more forcefully that he had made clear during their private session that the Mexican government would not pay for a border wall under any circumstances.

Trump's campaign responded and did not directly contradict Pena Nieto, but said both sides were clear about their differences on the topic headed into the meeting.

"Today was the first part of the discussion and a relationship builder between Mr. Trump and President Peña Nieto. It was not a negotiation, and that would have been inappropriate. It is unsurprising that they hold two different views on this issue, and we look forward to continuing the conversation." said Trump's senior adviser Jason Miller.

Trump's running mate Mike Pence said neither side needed to bring it up because each knew where the other stood on the wall.

"What I've heard is a whole range of topics were discussed in the meeting. The subject of the wall was discussed. But getting into the details in negotiations about paying for the wall, it really was't that kind of a meeting," Pence said.

Trump has made his pledge to build a border wall a central plank of his campaign and has said repeatedly he will force the Mexican government to pay for it.

Trump's hastily scheduled trip came less than 24 hours after he announced he had accepted an invitation from Pena Nieto to visit to discuss the U.S.-Mexican relationship. It comes hours before a scheduled address in Phoenix where Trump pledged to clarify his position on illegal immigration.

CNN reported Trump arrived in Mexico City by airplane and was taken by helicopter to the presidential palace. Trump was accompanied by Alabama Sen. Jeff Sessions and former New York City Mayor Rudy Giuliani on the trip. The two sides met in private for more than an hour and offered joint statements afterward, followed by a brief press conference.

Trump said the problem of illegal immigration impacts both countries, saying "it's not just a one-way street."

"We all share a common interest in keeping our hemisphere safe, prosperous and free," Trump said in remarks after the meeting. "No one benefits when human smugglers and drug traffickers prey on innocent people, when cartels commit acts of violence, when illegal weapons and cash flow from the United States into Mexico."

Pena Nieto, who said he has extended an identical invitation to Democratic nominee Hillary Clinton to visit his country, said the two nations benefit most when their relationship is rooted in "mutual respect." He reiterated his desire to protect and defend Mexican citizens whether they live in his country or the United States.

Though he pledged he would be willing to reopen discussions on illegal immigration and international trade, Pena Nieto also offered a rebuke of Trump's controversial rhetoric about Mexicans during the campaign.

"Mr. Trump, I [would] like to reiterate to you what I expressed to you privately," Pena Nieto said. "My priority as president is to protect Mexicans wherever they may be. That is my responsibility and I will continue to comply with it in the United States. Mexican nationals in the United states are honest people of good will, working people that respect family, respect life in the community and they respect the law. As such, Mexicans deserve everybody's respect."

Pena Nieto's rebuke follows more than a year of campaigning by Trump that found the candidate repeatedly offering harsh words for undocumented Mexican immigrants and a sitting federal judge from Indiana who he labeled "Mexican."

Trump has in the past also pledged to create a "deportation force" that would round up the estimated 11 million undocumented immigrants in the United States and deport them. Trump began his presidential campaign saying the Mexican government was sending "murderers" and "rapists" into the United States illegally.

As for Pena Nieto, it remains unclear why he sought a meeting with Trump, who he once likened to Hitler for his anti-Mexican rhetoric. Pena Nieto remains unpopular in opinion polls in his country.

The meeting follows weeks of conflicting messages from Trump and his campaign on whether he will stick with his hardline stance on immigration, including whether some of the nation's undocumented immigrants would be allowed to stay and, if so, under what conditions. Immigration hardliners have labeled anything short of automatic deportation a form of "amnesty" that will only serve as incentive for more immigrants to cross the border illegally to live in the United States.

Clinton's campaign responded to news of Trump's trip in a statement: "What ultimately matters is what Donald Trump says to voters in Arizona, not Mexico, and whether he remains committed to the splitting up of families and deportation of millions."

Wednesday marked the first trip outside the United States for either candidate in the general election. Trips abroad were once seen as anathema for presidential candidates but have in recent campaigns become more common. Then-Sen. Barack Obama took a trip through Europe and the Middle East in 2008 that helped voters envision a first-term senator as a president on the world stage. Mitt Romney, the 2012 Republican nominee, also took a trip to European capitals to meet with world leaders. 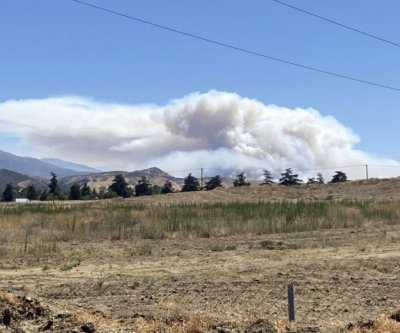