Biden's debut on the campaign trail alongside Democratic nominee Hillary Clinton turned into a forceful attack on her GOP opponent, whom the vice president said is already hurting America's national security.

At the rally in his native Scranton, Pa., Biden mentioned an individual in his entourage who carries what is known colloquially as the "nuclear football," a briefcase used to authorize the launch of atomic weapons. Versions of the device go everywhere the president goes, and also accompany the vice president -- in case something renders his boss unable to make a launch decision.

"He is not qualified to know the code," Biden said of Trump. "He cannot be trusted."

The vice president also referenced comments from current and former U.S. military officers, who said they would not follow certain orders from a President Trump if they mirrored his most extreme campaign pronouncements.

Biden hit the Republican nominee for what the vice president described as an affection for strongmen like Russian President Vladimir Putin, for employing "the politics of fear," and for allegedly threatening to send American citizens to the military prison at Guantanamo Bay, Cuba.

On global affairs, the former longtime Senate Foreign Relations chairman called Trump "profoundly wrong" and "dangerous" and "un-American," adding that the New York businessman's many comments "show a profound ignorance of the Constitution."

Clinton, he said, "has forgotten more about foreign policy than Trump and his entire team -- I'm not exaggerating -- will ever understand." He called the Democratic nominee "tested," adding that she was a part of discussions as head of the State Department that ultimately ended with American foes being sent "to the depths of Hell."

At his own campaign event in Ohio Monday, Trump called Clinton's stint as secretary of state a "total disaster." Decisions she and President Barack Obama made "launched ISIS onto the world stage," he said, referring to the Islamic State terrorist group.

Trump also said Clinton lacks the judgement and "moral character" to be president, adding that she lacked the "mental and physical stamina to take on ISIS."

Clinton and Biden had originally been scheduled to campaign together in Scranton in July. But the event was canceled in the wake of the shooting deaths of five police officers in Dallas.

Biden told the crowd that he would meet regularly with Clinton when she served as secretary of state.

"I became the Obama Whisperer," he said.

Biden also spoke of his late son Beau, who served a tour of duty in Iraq. Beau Biden died of brain cancer last year. The vice president said he would have prevented his son from going to Iraq if Trump had been president while he was alive.

"Had Donald Trump been president, I would have thrown my body in front of him," he said.

.
Get breaking news alerts and more from Roll Call on your iPhone or your Android. 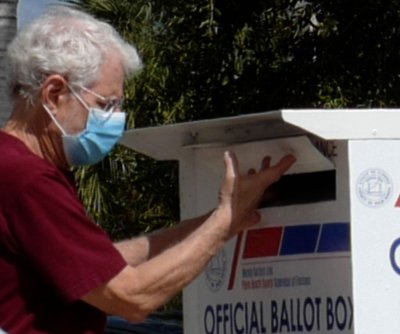 U.S. News // 15 hours ago
U.S. blacklists 6 Chinese firms for dealing with Iran shipping network
Oct. 19 (UPI) -- The Trump administration has blacklisted two Chinese businessmen and six Chinese companies for doing business with the Islamic Republic of Iran Shipping Lines and in some cases of helping it to evade U.S. sanctions.