FBI hands over documents from Clinton email investigation to Congress

Clinton's campaign said Tuesday it's concerned that Republicans may use the documents to try and derail its White House bid. 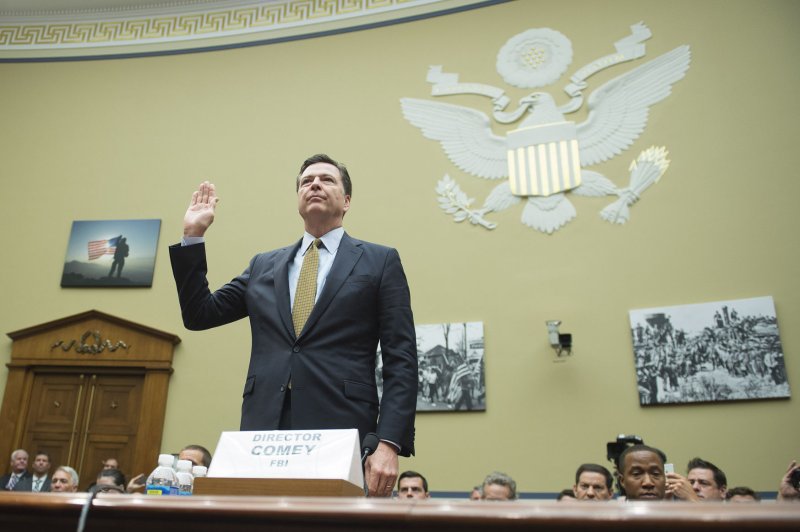 FBI Director James Comey, Jr., is sworn in before testifying during a House Oversight and Government Reform Committee hearing on the bureau's investigation into Hillary Clinton's use of a private email account while serving as Secretary of State between 2009 and 2013, Thursday, July 7, 2016. Tuesday, The FBI said it had handed over documents from the investigation, which recommended no criminal charges against the Democratic presidential candidate, to Congress. File Photo by Kevin Dietsch/UPI | License Photo

WASHINGTON, Aug. 16 (UPI) -- The U.S. Federal Bureau of Investigation on Tuesday turned over a number of documents to congressional investigators from its recent investigation into Hillary Clinton's controversial email use as secretary of state.

The bureau concluded a lengthy investigation into the matter last month, at which time it stated that criminal charges against the Democratic presidential candidate were not warranted.

The U.S. Departments of Justice and State have been separately reviewing questions about whether Clinton used a private and unsecured email server to send or receive classified information between 2009 and 2013 when she was a top official in President Barack Obama's administration.

"Staff is currently reviewing the [FBI] information that is classified Secret. There are no further details at this time," a committee spokesperson said Tuesday.

Included in the documents were reportedly notes that agents took last month during a three and-a-half hour interview with Clinton on the matter.

It was reported Monday that the bureau was preparing to turn over the documents.

The former State chief has repeatedly denied handling classified information with her private email account, but subsequent revelations have at the very least cast some doubt over those claims.

In testimony before the congressional panel last month, FBI Director James Comey, Jr., indicated that there had been a small amount of classified material that passed through Clinton's non-government account. He also characterized the former first lady's use of a private account for government work as "extremely careless."

The ongoing ordeal, also, has been a thorn in the side of Clinton's presidential campaign -- and a source of ammunition for GOP challenger Donald Trump.

The State Department, which is also conducting a review of the matter, said it reviewed most of the FBI documents before they were handed over to Congress -- to ensure no sensitive diplomatic information was contained in them.

Some Democrats believe GOP lawmakers want the documents to try and use them to derail Clinton's White House bid -- a concern her campaign shared Tuesday.

"We believe that if these materials are going to be shared outside the Justice Department, they should be released widely so that the public can see them for themselves, rather than allow Republicans to mischaracterize them through selective, partisan leaks," spokesman Brian Fallon said.

U.S. News // 7 hours ago
Gunman kills two civilians, injures three officers in Texas shootout
July 3 (UPI) -- A Texas gunman killed two people and injured a third Saturday before a shootout with law enforcement that left three police officers injured in Haltom, which is part of the Dallas-Fort Worth region