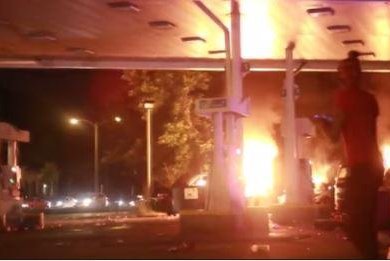 A gas station and auto-parts store were set fire Saturday night in a violent demonstration in Milwaukee after police fatally shot a man armed with a handgun during a foot chase. Screenshot by NBC News.

Police said the unidentified victim, 23, was allegedly armed with a handgun and shot dead by an officer after fleeing from a traffic stop on Milwaukee's north side around 3:30 p.m. Saturday.

Hours later crowds took to the streets. One officer was injured by a brick, a police car was smashed and another set fire. Protesters also set fire to a gas station and auto-parts store, police said.

"If you love your son, if you love your daughter, text them, call them, pull them by the ears and get 'em home," Mayor Tom Barrett said in an early morning news conference.

He pleaded with residents to "do everything" for calm.

The crowd of around 100 people had thinned early Sunday morning, Milwaukee Assistant Police Chief James Harpole told reporters. But he said it was "still a very tense situation for us." At least three people were arrested.

The violence dwindled after a woman who identified herself as a family member of the dead man pleaded with people to leave the scene.

"We don't want anyone else to go to jail or get hurt," she told the crowd.

The mayor said some involved in the disturbances took to social media early in the evening to encourage others to cause trouble.

The mayor said police had "shown an amazing amount of restraint."

The man shot had a "lengthy arrest record" and carried a semiautomatic handgun reported stolen in a burglary in Waukesha in March, police said.

The officer — a 24-year-old man with the police department for six years and an officer for three years — was placed on administrative duty.

"That officer had to make a split-second decision when the person confronted him with a handgun," Milwaukee Police Assistant Chief Bill Jessup said. "This is a risk they take every day on behalf of our community."

Milwaukee police said two officers pulled initially pulled over two suspects in a vehicle. When the suspects stopped, they ran from the car.

The officers chased them. During the chase, one officer shot one suspect who was allegedly armed with a handgun.

U.S. News // 31 minutes ago
U.S. government lowers oil price forecast, with caveats
Dec. 6 (UPI) -- A forecast on the future of oil prices from the U.S. government is packed with uncertainties related in no small part to recent developments regarding Russia.