“He makes it harder every day to continue to support him,” former Mitt Romney aide and New Hampshire Republican Ryan Williams said Tuesday.

Republican presidential nominee Donald Trump leaves the stage after addressing the Detroit Economic Club, where he introduced his economic plan in Detroit, Michigan, on Tuesday. At a rally in North Carolina Tuesday, the businessman outraged Democrats and some Republicans by remarking that perhaps gun rights supporters could do something about the prospect of Hillary Clinton being elected in November. Some Democrats said it was a veiled comment suggesting gun violence, while Trump's campaign claimed he was only saying that 2nd Amendment supporters have considerable voting influence. Photo by Rebecca Cook/UPI | License Photo

WILMINGTON, N.C., Aug. 9 (UPI) -- The U.S. Secret Service could potentially take a step unprecedented in American political history -- investigate one of the candidates it is assigned to protect.

The agency said it is "aware" of a remark made by GOP presidential nominee Donald Trump at a North Carolina campaign stop on Tuesday, which appeared to some a thinly-veiled quip about threatening Democratic nominee Hillary Clinton with gun violence.

During the rally in Wilmington, Trump warned against electing Clinton and allowing her to appoint liberal Supreme Court justices.

"If she gets to pick her judges, nothing you can do folks," Trump said, before adding, "Although the Second Amendment people -- maybe there is, I don't know."

The Trump campaign, though, said later that the businessman was not calling for violence -- but was rather simply stating that 2nd Amendment supporters have a lot of influence.

The Secret Service is tasked with protecting U.S. presidential candidates, as well as the president-elect and the sitting president.

"But there IS something we will do on #ElectionDay: Show up and vote," the NRA said in a tweet.

The Secret Service is aware of the comments made earlier this afternoon.

Clinton blasted Trump's remarks as nothing but more rhetoric from a candidate who's wildly unqualified to be president of the United States.

"Here's the sad truth: There is no other Donald Trump. This is it," she tweeted.

"This is simple -- what Trump is saying is dangerous," he said in a statement. "A person seeking to be president of the United States should not suggest violence in any way."

Clinton supporter Gabrielle Giffords, the former Democratic Arizona congresswoman who was wounded in an assassination attempt in 2011, said Trump's remarks are proof that he is unqualified to lead.

"Donald Trump might astound Americans on a routine basis, but we must draw a line between political speech & suggestions of violence," she said in a tweet Tuesday.

Trump's campaign is currently fighting what appears to be a growing deficit in the polls behind Clinton, but many of the candidate's recent controversies are also turning off many Republicans as well as Democrats.

"He makes it harder every day to continue to support him," former Mitt Romney aide and New Hampshire Republican Ryan Williams said. "It's almost like he wants people to denounce him. He's basically asking for it at this point. Donald Trump saying something crazy is becoming a daily occurrence -- like the sun rising or the weather." 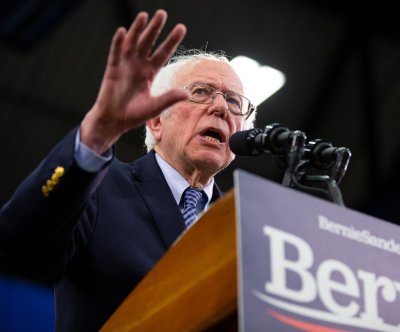 U.S. News // 7 hours ago
Final week of February to bring chances for snowfall across nation
Feb. 23 (UPI) -- As February enters its final week, AccuWeather forecasters are eyeing two storms -- one weakening, the other strengthening -- that have the potential to dump snow on areas from the central Plains and middle Mississippi Valley to the Great Lakes region and the interior Northeast.