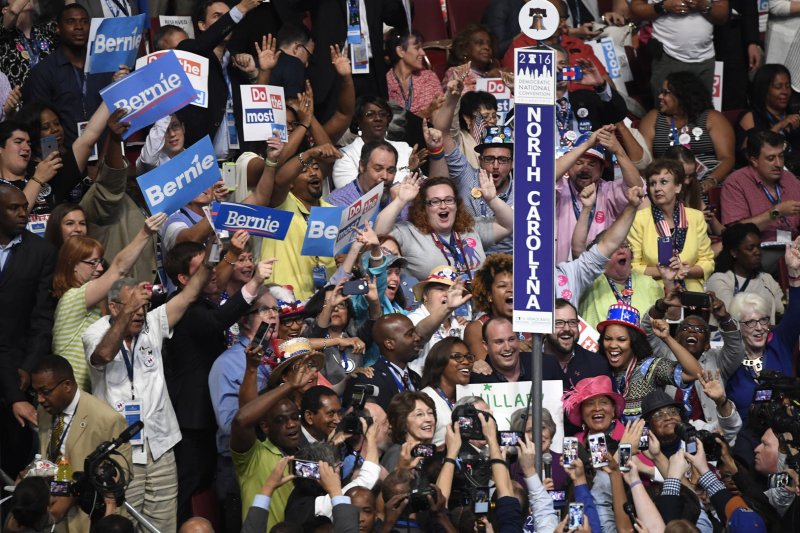 North Carolina delegates cheer as they announce their roll call vote at the 2016 Democratic National Convention at Wells Fargo Center in Philadelphia on Tuesday. The Fourth Circuit Court of Appeals struck down a law passed by the Republican-led state General Assembly requiring voters to show a driver's license and curtailing early voting. Photo by Mike Theiler/UPI | License Photo

The law passed the North Carolina legislature on a party line vote in the wake of the Supreme Court decision striking down key provisions of the Voting Rights Act of 1965 in the case Shelby County, Ala. vs. Holder. A three-judge panel on the Virginia-based Fourth Circuit unanimously decided North Carolina's law served the sole purpose of placing impediments in the path of black voters seeking to exercise their rights.

"Although the new provisions target African Americans with almost surgical precision, they constitute inapt remedies for the problems assertedly justifying them and, in fact, impose cures for problems that did not exist," wrote Judge Diana Gribbon Motz.

The law required voters to show photo ID issued by the North Carolina Department of Motor Vehicles, a form of identification that black citizens are most likely not to have. It also reduced the number of early voting days from 17 to 10, which the Fourth Circuit noted reduced by half the number of Sundays where traditionally black churches hold "Souls to the Polls" events aimed at increasing voter turnout. The law also eliminated same-day registration and absentee ballot voting, another practice used predominantly by black voters.

The judges noted legislators specifically asked for data on racial voting patterns prior to enacting the law, offering further proof the legislation was aimed at disenfranchising black voters.

"Upon receipt of the race data, the General Assembly enacted legislation that restricted voting and voting in five different ways, all of which disproportionately affected African Americans," Motz wrote.

The voter ID law was set to take effect for the first time in 2016.

Candidates control their own social media; what message are they sending? Democrats to bind two-thirds of superdelegates to state results

U.S. News // 3 hours ago
Rare fall nor'easter, 'miserable' weather to mark final week of October
Many in the northeastern United States have rarely had to bring out rain coats and jackets due to the lack of chilly temperatures and relatively dry conditions so far this October, but a change is in the works.