Senator Bernie Sanders of Vermont speaks on day one of the Democratic National Convention at the Wells Fargo Center in Philadelphia, Pennsylvania on Monday. On Tuesday he said his supports need to “accept the reality” that Hillary Clinton is their nominee. Photo by Pat Benic/UPI | License Photo

After speaking to the Democratic National Convention on Monday night, when he endorsed Clinton, he sent an email to his campaign donors asking them to give their support to the new organization.

"Our work will continue in the form of a new group called Our Revolution," the email said. "The goal of this organization will be no different from the goal of our campaign: We must transform American politics to make our political and economic systems once again responsive to the needs of working families."

The organization lists itself as a 501(c)(4), which allows groups to engage politically but not as a primary activity. Otherwise, it would be a violation of IRS tax-exemption rules. President Barack Obama's campaign organization -- Organizing for Action, formed after the 2012 election -- is categorized under the same designation.

The website says Our Revolution is "not authorized by any candidate or candidate's committee" but is the "next step for Bernie's movement."

During a speech Tuesday morning at a Bloomberg Politics breakfast, said he doesn't expect to fundraise for Clinton through Our Revolution or otherwise,, instead citing a need to support down-ballot candidates through his vast email list of donors.

"I think we'll be raising money for some school-board candidate in Tulsa, Okla., who probably does not have the access to money that Hillary Clinton does," he said. "Trust me, I've seen it in action, she has a pretty good system."

Sanders also met Tuesday with the New York delegation, some of whom have been vocally against Sanders' support of Clinton.

Before Sanders spoke, New York Sen. Charles Schumer told his delegation he understands they're disappointed Sanders won't be their nominee.

"I think at the end of the day everything will work out," Schumer said in an interview with Syracuse.com. "Are there some people who are going to stay upset? Yes. But 90 to 95 percent of Bernie's supporters are going to vote for Hillary."

At the Bloomberg breakfast, Sanders said he hopes his supporters would eventually "accept the reality" of Clinton.

"Democracy is a little bit messy sometimes, especially for young people who work their hearts out," Sanders said. "They worked against Hillary Clinton and now we're saying we want you on board to support Hillary Clinton."

His delegates will be able to vote for him during Tuesday's roll call nomination vote.

"If you were campaigning for me for six months, or eight months, knocking your brains out and then the roll call came, who are you going to vote for?" he said. "You're going to vote for Bernie Sanders. Of course you are."

Sanders said his supporters shouldn't be swayed by Republican nominee Donald Trump's efforts to win them over.

"The role that I will play, and it's an important role, is being very boring and contrasting Hillary Clinton's position on the issues with Donald Trump," Sanders said.

The two are drastically different in policies and their campaign styles, Sanders said.

"I trust that I don't come across as some kind of authoritarian strongman who's telling my supporters or the American people that I'm going to run the show," he said.

U.S. News // 35 minutes ago
Teen dies, sister rescued after sand collapse at Jersey Shore beach
May 17 (UPI) -- Authorities said a teenage boy died and his sister was injured at a Jersey Shore beach on Tuesday when a large hole they were digging collapsed, trapping the siblings under sand. 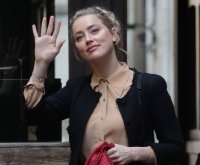 U.S. News // 2 hours ago
Grand Canal painting fetches $56.6M, a record for Monet Venice work
May 17 (UPI) -- A Claude Monet painting of the Grand Canal in Italy sold at auction Tuesday for $56.6 million, the highest one of his Venice paintings has fetched, Sotheby's in New York announced.

U.S. News // 4 hours ago
Netflix cuts 150 workers in new round of layoffs
May 17 (UPI) -- Netflix laid off 150 employees Tuesday as the streaming giant faces subscriber losses, slower revenue growth and a shareholder lawsuit.

U.S. News // 6 hours ago
Fertilizer, grain shortages contributing to rising food prices
May 17 (UPI) -- A fertilizer shortage is just one part of a confluence of factors behind rising food prices across the United States, as the Biden administration continues looking for financial solutions for the agriculture industry.
Advertisement