Lynch fends off GOP grilling on decision not to prosecute Clinton 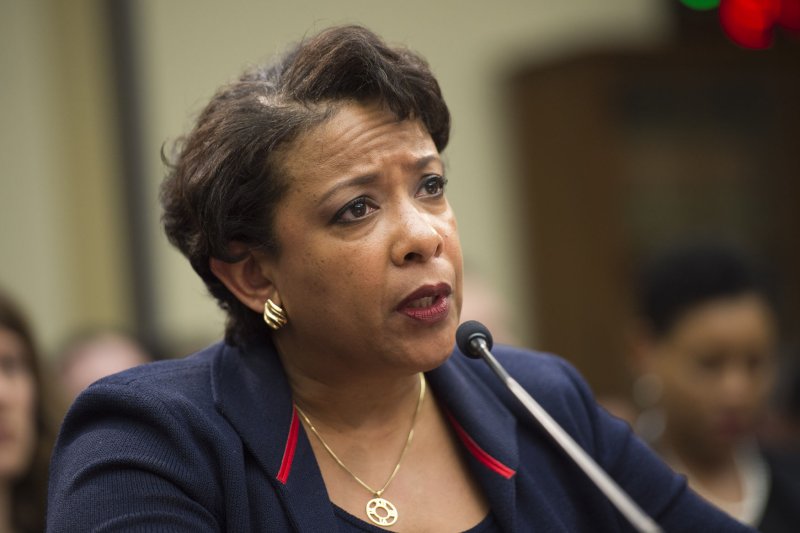 Attorney General Loretta Lynch testifies Tuesday during a House Judiciary Committee hearing on the investigation into Democratic presidential candidate Hillary Clinton's use of a private email server while serving as secretary of state. This is Lynch's first time testifying on Capitol Hill since she announced Clinton won't be prosecuted for sending classified information on a private, unsecured email system. Photo by Kevin Dietsch/UPI | License Photo

WASHINGTON, D.C. -- Attorney General Loretta Lynch fended off sharp criticism by House Republicans Tuesday over the Justice Department's decision not to file charges against Hillary Clinton for her email use as secretary of state.

Republican lawmakers on the House Judiciary Committee grilled Lynch about her decision and also questioned her impromptu meeting last month with Clinton's husband, former President Bill Clinton. That meeting, occurring while the FBI investigation was still underway, lasted 30 minutes aboard a plane on a Phoenix airport tarmac.

Lynch insisted the investigation of Hillary Clinton's use of a private email server while at the State Department wasn't discussed, but she acknowledged in an interview at the Aspen Ideas Festival on July 1 that her encounter with Bill Clinton "cast a shadow" over the probe and said she "certainly wouldn't do [it] again."

Lynch's appearance before the House Judiciary Committee came one week after FBI Director James Comey announced the end of a yearlong investigation into Clinton's email use during her tenure as secretary of state. Comey called Clinton's handling of classified information "extremely careless," but ultimately recommended that she not be prosecuted.

The attorney general said early on in her testimony Tuesday that she would not comment any further on the Justice Department's decision to accept the FBI's recommendation. When pressed -- anyone else would have been fired, one Republican suggested -- she told lawmakers to review Comey's comments last week.

"Every case is different, every case has to be handled in the same way, every individual, whether they are a former secretary or anyone else, has to be reviewed with the facts and the law," Lynch said to the committee.

Lynch also said she never spoke to either Clinton about the investigation. But Republican committee members insisted that Hillary Clinton was held to a different standard for her email use than other federal employees, saying her political status insulated her from facing consequences for mishandling classified information.

Lynch steadfastly refused to discuss the legal standards or specifics of the investigation, despite testominy earlier in the week from Comey, who was open about the FBI's determination Clinton should not be charged.

"While I understand that this investigation has generated significant public interest, as Attorney General, it would be inappropriate for me to comment further on the underlying facts of the investigation or the legal basis for the team's recommendation," Lynch said at the outset of the hearing. "I can tell you that I am extremely proud of the tremendous work of the dedicated prosecutors and agents on this matter."

"Were a rank-and-file federal employee to do what Secretary Clinton did, they would face severe punishment, including termination, revocation of security clearances or criminal prosecution," said Rep. Bob Goodlatte, R-Va., who chairs the Judiciary Committee. "Even Director Comey acknowledged this fact at a recent congressional hearing."

Comey told the House Oversight Committee last week that Clinton used her private email server to send and receive some classified information, seeming to contradict previous statements from Clinton made to Congress under oath.

Advertisement
RELATED Poll: Most U.S. adults disapprove of decision not to charge Clinton on emails

As Republicans on the committee went after Lynch regarding the Justice Department's decision, many Democrats steered the debate toward policing reform and tighter gun-control measures. They criticized GOP lawmakers for continuing to focus on Clinton's emails in the waning days before a seven-week congressional recess.

"Let us be clear: The criminal investigation is closed," Rep. John Conyers, D-Mich., said. "There was no intentional wrongdoing."

"If any of my colleagues are not yet convinced, it is because they do not want to be convinced," Conyers added. "And in their zeal to call Secretary Clinton a liar or a criminal -- despite the facts and despite the law -- I fear they will have missed an opportunity to engage with you on more worthy subjects."

U.S. News // 1 hour ago
Private group works to free Americans, locals loyal to U.S. from Afghanistan
WASHINGTON, Jan. 25 (UPI) -- Task Force Argo, a network of American veterans and private citizens, works toward rescuing Americans and vulnerable Afghans who previously assisted the U.S. government and are stuck in a country now under Taliban rule.

U.S. News // 3 hours ago
Walmart to add vertically farmed produce in West Coast stores later this year
Jan. 25 (UPI) -- Walmart announced Tuesday that it's made an investment in vertical farming company Plenty and plans to carry products from the startup in stores on the West Coast later this year.
Advertisement