Bernie Sanders and Democratic presidential candidate Hillary Clinton wave to the crowd after Sanders announced his endorsement of Clinton during a rally at Portsmouth High School in Portsmouth, N.H. on July 12, 2016. Photo by Matthew Healey/UPI | License Photo

The announcement came Tuesday in Portsmouth, N.H., a state Sanders won handily in the primary, and which will be a battleground in Clinton's general election effort against Republican Donald Trump.

Sanders had, in effect, lost the nomination contest many weeks ago when before the California primary, multiple media outlets reported Clinton had gained the number of delegates needed to clinch the nomination, thanks to undecided superdelegates coming to her side.

Still, the liberal firebrand Sanders did not relent, pledging to campaign until all the votes were cast, and even after that.

After a closed-door White House meeting with President Barack Obama, a defiant Sanders said he was still not dropping out of the race and, standing in front of the White House Portico, told reporters he would continue campaigning until the Democratic convention in Cleveland.

That changed Tuesday, when Sanders formally endorsed Clinton and encouraged his impassioned supporters to vote for her in November.

"Together we have begun a political revolution to transform America and that revolution continues. Together we will continue to fight for a government which represents all of us and not just the 1 percent," Sanders said, with a smiling and clapping Clinton at his side. "Our campaign won the primaries and caucuses in 22 states and when the roll call at the Democratic national convention [is] announced it will show we won almost 1,900 delegates, far more than almost anyone thought we could win."

Clinton responded with a fiery stump speech, thanking Sanders for his endorsement and pledging to continue fighting for the progressive domestic agenda that rallied millions of voters to his campaign.

"Thank you, thank you Bernie for your endorsement, but more than that, thank you for your lifetime of fighting injustice," Clinton said. "I am proud to be fighting alongside you, because, my friends, this is a time for all of us to stand together."

The endorsement, weeks in the making, effectively brings Sanders' campaign to a close.

Harried start to a political revolution

Sanders' campaign began at a hastily called press conference outside the Capitol during which the self-described democratic socialist told the smattering of reporters in attendance he didn't have "much time" to take questions because he had to return inside to vote.

It concludes having inspired millions to his progressive agenda -- many who involved themselves in politics for the first time -- while renewing a public debate about income inequality and the outsized role the wealthiest 1 percent of Americans exert on the political process.

Clinton praised Sanders for running a "campaign of issues, not insults" -- and that was largely true, though the two camps grew increasingly testy as the grueling primary calendar wore on from the January snow in Iowa and New Hampshire through early June in California.

Early on, Sanders passed on what might have been his most potent line of attack against Clinton, her use of a private email server while secretary of state. As the specter of a federal investigation hung over her campaign -- and with Republicans referencing it during campaign speeches -- Sanders declared during an early debate that U.S. voters were "sick and tired of hearing about your damn emails," saying he preferred to talk about more important issues facing the country.

Though he avoided the email issue, Sanders was at turns a fierce critic of Clinton's policies and the wealthy, connected donors who helped fund her campaign. He routinely contrasted her heavily funded super PACs with his own campaign's small donor contributions, which he ceaselessly reminded people came in at an average of $27 apiece.

(The refrain prompted Clinton to joke during her speech Tuesday, "We accept $27 donations too, you know.")

Sanders grew to national prominence assailing the political status quo with an angry populist message. His call to a "political revolution" was heeded by scores of college-age liberals and independents turned off by the politics-as-usual stagnation in Washington.

He would go on to lay out one of the most boldly liberal agendas in a generation: universal government healthcare, free public college tuition, expanding Social Security, massive action to combat climate change, dismantling the Wall Street banking sector and raising the federal minimum wage to $15 per hour.

The candidates debated nine times and their competing visions of the presidency were made clear. Where Clinton promised studious leadership and building on the progress of President Barack Obama, Sanders rejected incrementalism in favor of an audacious policy agenda to fundamentally transform the role of the federal government.

If Sanders' campaign was fueled by those outside the political establishment, it was ultimately Clinton's mastery of the Democratic Party machinery that will deliver her the nomination.

Clinton won a huge majority of the black vote, along with older women, two blocs crucial to capturing the Democratic nomination. Her position as the establishment-backed candidate gave her an immediate edge in the delegate race, having started with a large lead in pledged superdelegates that only grew as the campaign went on.

Despite an effective tie in Iowa and a drubbing in the New Hampshire primary by Sanders, a New Englander, Clinton went on to score early primary wins in South Carolina and Nevada, two states with minority-heavy electorates.

Then the political tsunami hit shore on Super Tuesday, when a large number of Southern states voted heavily in favor of Clinton, cementing her as the front-runner and Sanders as the prohibitive underdog.

But backed by an online fundraising machine that saw him hauling in tens of millions through the spring, Sanders battled back. After the campaign calendar returned to smaller, less diverse states in the Mountain West and Midwest, Sanders scored several wins and put off any thoughts from the Clinton campaign of quickly wrapping up the nomination.

If one moment crystalized the potency of his appeal to an angry electorate it came in Michigan. Polls showed Clinton a prohibitive favorite, but when the votes were cast, it was the underdog who emerged victorious.

A stunned Sanders appeared inside a campaign office, his team having declined even to schedule a rally, where the candidate proclaimed the race truly up for grabs.

The momentum was short-lived.

Sanders had hoped his anti-free trade message would appeal to another set of Midwest voters in Ohio, but Clinton responded with a victory there and in Florida, again recapturing momentum and continuing to pad her delegate lead.

Clinton went on to deliver a string of knockout blows in her adopted home state New York, and across the mid-Atlantic. She punctuated her primary campaign with a landslide win in California, though the day before the final state primary, news outlets had already proclaimed her the presumptive nominee thanks to enough uncommitted superdelegates coming to her side.

The political effect of Sanders' endorsement is not yet clear. Polls have shown up to one in four Sanders supporters said they would not vote for Clinton in the general election. Sanders seemingly spoke directly to those individuals during his endorsement speech, repeatedly using words like "listening," "believes" and "understands" when describing Clinton's positions on his agenda.

Whether his supporters believe Clinton is another question.

"While Donald Trump is busy insulting Mexicans, and Muslims, and women and our veterans, Hillary Clinton understands our diversity is one of our greatest strengths," Sanders said.

He pledged to campaign vigorously on her behalf in the general election, visiting "every corner of this country" to help Clinton win the White House and Democrats take control of Congress.

"As she helped lead the fight to universal healthcare I served with her in the U.S. Senate and know her as a fierce advocate for the rights of our children. And I know her, and all of you know her, as one of the most intelligent people we have ever met. Hillary Clinton will make an outstanding president and I am proud to stand with her today," Sanders concluded.

U.S. News // 1 hour ago
Private group works to free Americans, locals loyal to U.S. from Afghanistan
WASHINGTON, Jan. 25 (UPI) -- Task Force Argo, a network of American veterans and private citizens, works toward rescuing Americans and vulnerable Afghans who previously assisted the U.S. government and are stuck in a country now under Taliban rule.

U.S. News // 3 hours ago
Walmart to add vertically farmed produce in West Coast stores later this year
Jan. 25 (UPI) -- Walmart announced Tuesday that it's made an investment in vertical farming company Plenty and plans to carry products from the startup in stores on the West Coast later this year. 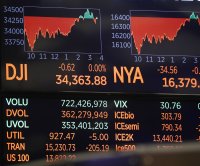