"We all benefit when good candidates compete with each other over how to make the lives of Americans better -- which is a far cry from the divisive and ugly Republican contest which revolved around exclusion, insult and division," the Democratic committee said Monday.

WASHINGTON, July 11 (UPI) -- The political action committee that represents a large contingent of Democrats in Congress on Monday formally announced its endorsement of Hillary Clinton for president.

The Progressive Action PAC (PAPAC), which is the committee of the Congressional Progressive Caucus, said in its announcement that its members and the Democratic candidate share numerous principles.

"Hillary Clinton shares our ideals and has worked to improve the lives of Americans her entire adult life – as an activist, a litigator, a First Lady, a Senator, and then a Secretary of State," the PAPAC said in a statement Monday. "Members of PAPAC unite behind her now, and we will work to ensure Secretary Clinton is the next President of the United States."

In its endorsement, the committee acknowledged progressive Vermont Sen. Bernie Sanders, who is technically still in the Democratic race -- and condemned GOP contender Donald Trump.

Advertisement
RELATED Poll: Most U.S. adults disapprove of decision not to charge Clinton on emails

"We believe the Democratic Primary has strengthened Secretary Clinton as a candidate and we thank Senator Bernie Sanders for raising critical issues in the course of the campaign," PAPAC stated. "Both Democratic candidates prioritized people, the environment, and a fair economy in the course of their debates and public messages.

"We all benefit when good candidates compete with each other over how to make the lives of Americans better -- which is a far cry from the divisive and ugly Republican contest which revolved around exclusion, insult and division."

Clinton responded Monday that she was "honored" to receive the backing of the PAC that represents so many Democratic lawmakers in Congress.

RELATED Harlan Ullman: Where has all the accountability gone?

The Congressional Progressive Caucus is the largest membership organization within the Democratic congressional caucus in Congress, with 71 members. 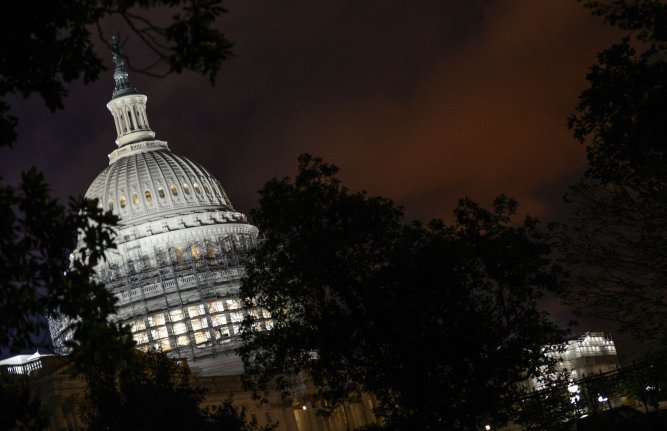 The political action committee of the Congressional Progressive Caucus, which represents 71 Democratic members of Congress, issued its formal endorsement of Hillary Clinton for president on Monday. The former New York senator replied by saying she was "honored" to receive the PAC's support. Photo by Leigh Vogel/UPI

"For 25 years, the CPC has been a champion for working people and on behalf of Americans who have been left out and left behind. And CPC members know, as I do, that we are stronger together," she said in a statement. ""We are stronger when we have each others' backs.

"We will fight to secure universal health care, raise the minimum wage, and protect Americans' fundamental right to vote--not corporations' right to buy elections," Clinton added, touching on many of the issues that make up the official 2016 Democratic platform. "It's why we will face up to the reality of systemic racism, and fix it together."

In her reply, the former New York senator restated her opposition to President Barack Obama's controversial Trans-Pacific Partnership -- one of the few issues she disagrees with the president on.

"We will say 'no' to trade agreements like the Trans-Pacific Partnership that would hurt American workers, and fully enforce our trade laws to protect American jobs," she said. ""And we are stronger when we make our economy work for everyone -- not just those at the top. That's why we will fight to make college debt-free and make the kinds of investments that will create good-paying jobs, with a bold plan to build 21st century infrastructure, revitalize American manufacturing, and combat climate change and make America a clean energy superpower."

Clinton also criticized the GOP in her statement, and her final paragraph was a thinly-veiled shot at Trump.

"We will stand up to Republican efforts to undermine or privatize the bedrock promise of Social Security-- and we'll fight to expand it," she said.

"Progressives know that in America, we don't tear each other down -- we lift each other up. We believe in building bridges, not walls. And we know that America is already great -- because for 240 years, ours has been the story of hard-fought, hard-won progress."

U.S. News // 3 hours ago
House lawmakers call for ban of stock trading by Congress members
Jan. 24 (UPI) -- A new letter signed by 27 members of the House asks that members of Congress be banned from trading or owning stocks.

U.S. News // 5 hours ago
3 firefighters hurt, another trapped in Baltimore roof collapse
Jan. 24 (UPI) -- Three Baltimore firefighters were seriously injured and another was trapped Monday when a roof collapsed during a two-alarm fire at a vacant home, fire officials said.
Advertisement