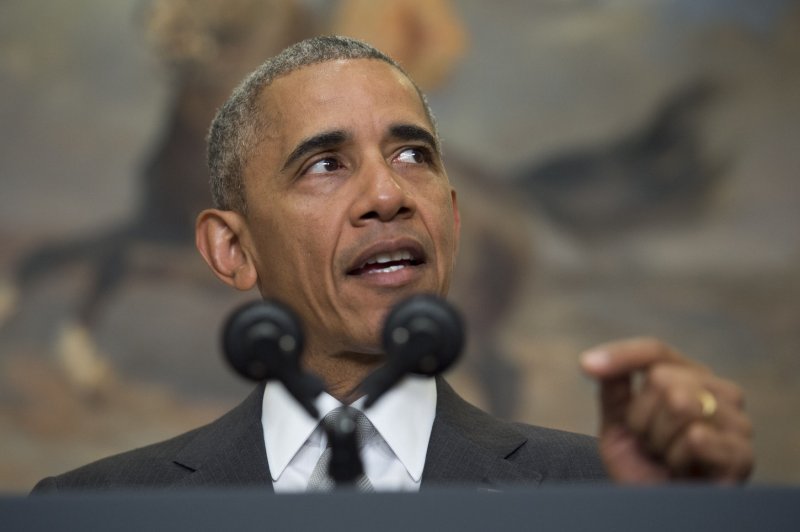 President Barack Obama announces that the United States will leave more troops in Afghanistan than originally planned through the end of the year, in the Roosevelt Room at the White House in Washington, D.C. on July 6, 2016. Obama addressed a "tough week" in the United States following the controversial shooting deaths of Alton Sterling and Philando Castile and the sniper attack, which killed five police officers, during the Black Lives Matter protest. During his speech at a NATO summit in Poland on Saturday Obama called the shooter "demented" and said that America was "not as divided as some have suggested." Photo by Kevin Dietsch/UPI | License Photo

DALLAS, July 9 (UPI) -- President Barak Obama insisted the United States is "not as divided as some have suggested" and praised Dallas police while condemning the "demented" shooter who killed five officers.

Obama acknowledged the "tough week" following the controversial shooting deaths of Alton Sterling and Philando Castile and the sniper attack during the Black Lives Matter protest on Thursday, but expressed optimism that Americans would come together.

"As painful as this week has been, I firmly believe that America is not as divided as some have suggested. Americans of all races and all backgrounds are rightly outraged about the inexcusable attacks on police," he said at the end of a NATO summit in Warsaw on Saturday.

He said people such as the Dallas and Orlando shooters are not representative of their respective races and religions as a whole.

Obama also continued his call for tighter gun control legislation saying, "you can't set aside the gun issue and pretend that that's irrelevant" and said "even the mention of it" is polarizing.

"When it comes to the issue of gun safety, there is polarization between a very intense minority, and a majority of Americans who actually think that we could be doing better when it comes to gun safety," he said.

Obama hailed Dallas law enforcement as an example for other agencies across the country.

"The Dallas Police Department is a great example of a department that has taken the issue of police shootings serious," he said, adding that the city lowered murder rates and "drastically reduced complaints about police misconduct. ... That's the spirit that I want to build on."

The man who gunned down Dallas police officers had a expansive cache of bomb-making materials and reserves of combat gear that included ballistic vests, rifles, ammunition and a personal journal of combat tactics in his home, investigators said.

Advertisement
RELATED Use of robot to kill Dallas gunman may be first for U.S. police

Micah Xavier Johnson was a former Army Reservist who was sent home from Afghanistan following a sexual harassment incident, an unusual disciplinary move for an incident that is typically handled through counseling.

Investigators have found Johnson, 25, was an Army veteran did not have a criminal history. The "likes" on his Facebook profile indicated he was a staunch supporter of radical black power movements.

Johnson died when police detonated an explosive on a robot near an area where he had barricaded himself. Police said he acted alone in the shooting that also left two civilians injured. The attack during a peaceful rally in protest of the controversial shooting deaths of Alton Sterling and Philando Castile was the deadliest day for police since 9/11.

The New York Times reported Johnson served in the Army Reserve from 2009 to 2015 and he left as a private first class.

He was deployed to Afghanistan in November 2013 and worked as a mason and carpenter. He was not involved in combat or injured.

Military lawyer Bradford Glendening said Johnson was accused of sexual harassment by a female soldier in his unit. He quoted an entry from Johnson's file dated May 2014 where the woman requested a protective order and suggested he receive "mental help."

Glendening told the Dallas Morning News Johnson was sent home from Afghanistan following the incident, which he said was unusual as the discipline for sexually harassment is typically counseling.

"He was very much disliked by his command, that was clear," Glendening said.

According to the Anti-Defamation League, the New Black Panther Party is the "largest organized anti-Semitic and racist black militant group in the United States" and African American Defense League founder Mauricelm-lei Millere has a history of calling for violence against police.

"Usually after a high profile police-related shooting he takes to social media to encourage violence against police," Oren Segal, director of the Anti-Defamation League's Center on Extremism, said of Millere.

Johnson's profile also contained a photo with Richard Griffin or "Professor Griff" of the rap group Public Enemy. Griffin was expelled from the group for anti-Semitic statements and embraced "a radical form of Afrocentrism," according to Dallas police.

Griffin stated via Twitter that he did not know Johnson and does not advocate killing police officers.

"I will not sit back and let these people assassinate my character and tie me to the Dallas shootings," he wrote.

Dallas Police Chief David Brown said that Johnson told police "he was upset about Black Lives Matter" and was angry about the fatal police shootings in Louisiana and Minnesota.

U.S. News // 4 hours ago
House lawmakers call for ban of stock trading by Congress members
Jan. 24 (UPI) -- A new letter signed by 27 members of the House asks that members of Congress be banned from trading or owning stocks.