On the issues: Candidates' world views come into focus on terrorism

WASHINGTON, June 27 (UPI) -- In the wake of the Orlando, Fla., nightclub massacre and ongoing -- and in some places, escalating -- threats from radical Islamist terror groups like al Qaida and the Islamic State, the presidential candidates have a significantly different outlook and set of policy proposals to address the problem.

The Pulse nightclub shooting appears to have been motivated at least in part due to the shooter, Omar Mateen, having been self-radicalized in support of the Islamic State. While investigators have yet to set forth his clear motives for the horrific shooting that killed 49 people, Mateen did tell police before he was killed he was acting on behalf of the Islamic State.

FBI Director James Comey said the day after the attack that identifying these kind of lone-wolf terrorists is "very difficult work."

And domestic terrorists are only one half of the equation. Foreign actors in a number of hot spots in Africa, Asia and the Middle East are promulgating violence in Western societies and at home. Major terrorist attacks have been carried out in Paris and Brussels in just the past few months.

Here are some of the public statements and policy proposals from the candidates for president to combat terrorism at home and abroad: 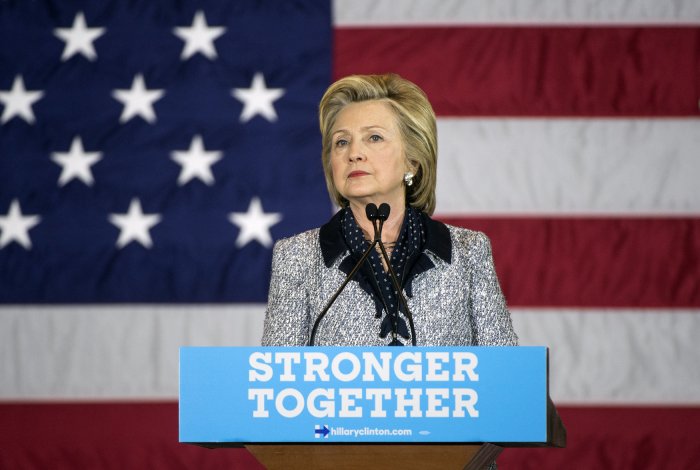 Democratic presidential candidate Hillary Clinton delivers remarks at a campaign event at the International Brotherhood of Electrical Workers Local Union No. 5, in Pittsburgh, Pennsylvania on June 14, 2016. Photo by Kevin Dietsch/UPI

As secretary of state, Clinton carved out a place as one of the more hawkish members of President Barack Obama's Cabinet.

As elements of the Taliban began to ramp up terror attacks in Afghanistan during Obama's first term, she advocated sending more U.S. forces there to tamp down the violence.

She also advocated for arming elements of the opposition forces in Syria in order to help overthrow the regime of Syrian President Bashar al-Assad. She similarly endorsed a plan to bomb forces loyal to Libyan President Moammar Gadhafi.

As senator, she voted to authorize the 2002 invasion of Iraq, a decision she has since said she regrets.

Now as a presidential candidate, Clinton has essentially called for more vigilance by the United States and its allies, but few new concrete policies to combat terrorism.

Clinton has called for greater effort by and cooperation between NATO and its allies in the Arab world on intelligence gathering. Pointing to the Paris terrorist attack in November, she noted the possibility it could have been thwarted if the French were made fully aware of the potential threats that other countries could or should have been aware of themselves.

In the fight against the Islamic State, Clinton said she opposes "miring our troops in another misguided ground war." Instead, she favors increasing military aide to U.S. allies in the region while encouraging countries like Saudi Arabia to do more to directly confront terrorists in the Middle East.

In terms of domestic security, Clinton supported rolling back the National Security Administration's bulk collection of Americans' phone calls and emails, though she has been critical of Edward Snowden, the NSA contractor who exposed the program.

In response to the Islamic State-inspired shootings in San Bernardino, Calif., Trump called for a temporary ban on allowing Muslims to enter the United States.

In a speech following the Orlando shooting, Trump decried the "politically correct response" to terrorist attacks and reiterated his call for banning Muslims, saying he had been right about it before. However, in his post-Orlando speech he slightly altered the blanket ban, saying it should only be Muslims from some "areas of the world."

"When I am elected, I will suspend immigration from areas of the world when there is a proven history of terrorism against the United States, Europe or our allies, until we understand how to end these threats," he said.

In March, Trump called for much harsher interrogation of suspected terrorists, including torture, and targeting and potentially killing members of a terrorist's family. Both proposals violate the Geneva Convention and Trump later reversed course, saying he would never order military officials to violate the law.

In terms of preventing domestic terrorism, Trump has advocated increased surveillance of Muslim communities. He told MSNBC that he would "strongly consider" closing some mosques in the United States if people were suspected to being terrorist sympathizers.

"You're going to have to watch and study the mosques because a lot of talk is going on at the mosques," Trump said.

The Libertarian Party candidate Gary Johnson said he does not want his views on foreign affairs and terrorism to be mistaken for the stereotypical view of his party as "isolationist."

Still, he said he opposes "interventionist" military policies, often in response to terrorist attacks, that he says have actually made the problem worse.

Johnson said he supports fully funding the military as a deterrent against terrorist attacks, but would seek congressional approval under the Constitution before carrying out military actions against terror groups.

"If we are attacked, we will attack back, and you can argue we have been attacked by [the Islamic State], but let's involve Congress in this," he said.

U.S. News // 1 hour ago
U.S. mobilizes search and rescue teams to ship out to Turkey
Feb. 7 (UPI) -- U.S. officials were gearing up their response to the earthquake in Turkey, with preparations well underway early Tuesday to dispatch at least two teams of international search and rescue workers to the scene.

U.S. News // 8 hours ago
Officials: Controlled release of toxic chemicals from derailed train in Ohio completed
Feb. 6 (UPI) -- A controlled chemical release from several rail cars that were part of a train that derailed in Ohio late last week has been completed, officials said.

U.S. News // 13 hours ago
Biden to travel to key 2024 states after State of the Union
Feb. 6 (UPI) -- President Joe Biden will travel to Wisconsin and Florida later this week to showcase his economic agenda, as well as plans to lower health care costs, following his State of the Union speech Tuesday.