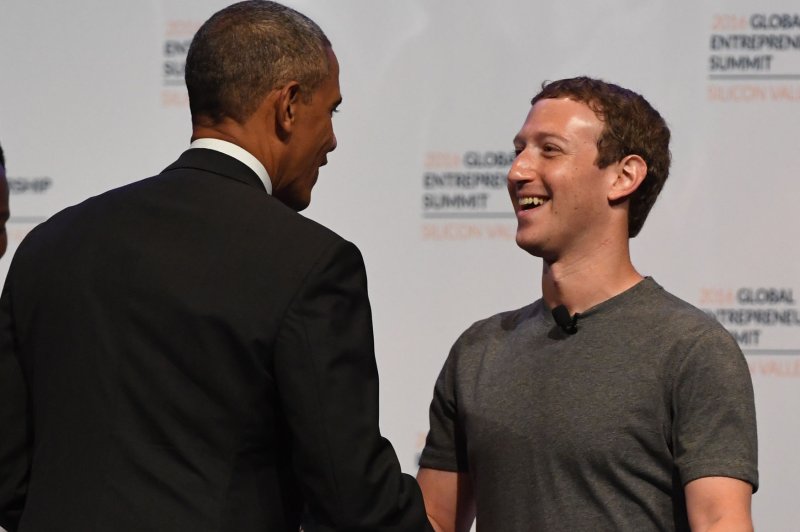 PALO ALTO, Calif., June 25 (UPI) -- President Barack Obama and Facebook CEO Mark Zuckerberg are generations apart and dress differently, but they both used their vast influence to tout entrepreneurship at a summit at Stanford University.

The leader of the free world and the creator of the biggest social network appeared at a panel discussion with three entrepreneurs at the 7th Global Entrepreneurship Summit on Friday.

"I could not wear a T-shirt like Mark," the 54-year-old president said, talking about the 32-year-old Facebook owner's trademark casual style.

Obama in a bit of informality took off his suit jacket.

The three-day conference brought together more than 300 investors and over 700 business people.

Obama has been touting entrepreneurship as a way to grow the economy. Earlier this week, the administration unveiled a plan called Tech Inclusion Pledge by high-profile companies, including Airbnb and Lyft, to improve diversity. In his remarks, Obama said, "Dozens of top tech companies are committing to make their technology workforces look like America."

Zuckerberg also explained how Facebook was created with young entrepreneurs.

"To me entrepreneurship is about creating change, not creating companies," said Zuckberg, whose company that started in his college dorm room at Harvard has grown to 1.65 billion active users.

"We created a revolution out of Facebook," said of the role of the social media as a tool during the Egyptian revolution in 2011.

Obama explained how a team of young people helped him learn how to utilize social media in his 2008 election campaign.

"A bunch of 20-year-olds came to me and said, "There's this new thing called MySpace," the president said. MySpace was Facebook's early competition.

Obama is a lot more tech-savvy than previous presidents. During his presidency, he opened a Twitter account and technology has been updated in the White House. He also fought to keep his Blackberry, which has been modified for security purposes. He's not allowed to use an iPhone or Android handset.

In his introduction of Obama, Stanford President John Hennessy said Obama made being a nerd cool.

"President Obama has a deep understanding of the importance of innovation and entrepreneurship, two characteristics that distinguish this university since its founding 125 years ago," Hennessy said.

On Thursday, U.S. Secretary of State John Kerry urged entrepreneurs at the summit to build companies that could tackle worldwide problems.

U.S. News // 9 minutes ago
Krystal burger chain files for bankruptcy
Jan. 21 (UPI) -- Georgia-based Krystal has filed for Chapter 11 bankruptcy but announced no plans for layoffs or closures at its fast-food chain.

U.S. News // 40 minutes ago
FEMA approves funds to rebuild hospital on Puerto Rican island
Jan. 21 (UPI) -- The Federal Emergency Management Agency approved $39.5 million to help an island off the coast of Puerto Rico rebuild its only hospital after damage caused by Hurricane Maria.