Libertarian candidates Gary Johnson, William Weld: It's all about choice 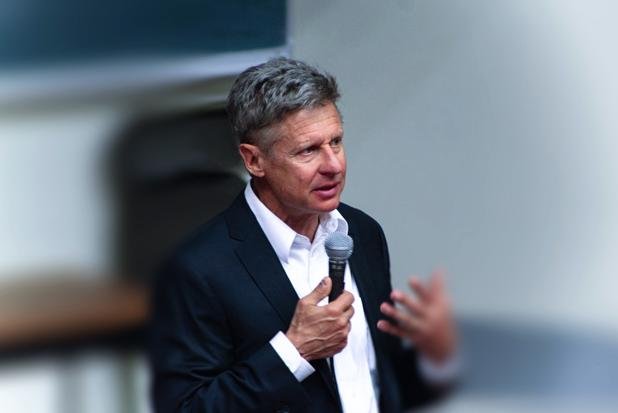 WASHINGTON, June 22 (UPI) -- Participating in a CNN Town Hall event, the Libertarian Party presidential ticket of former Republican Govs. Gary Johnson and William Weld addressed a range of issues, promising, as Johnson said, to "always come down on the side of choice."

"People should be able to make choices in their own lives. Always come down on the side of choice," Johnson said.

Both men described themselves as fiscally conservative but accepting of social differences. They are pro-gay marriage and support protecting a woman's right to abortion, but have proposed across-the-board spending cuts of 10 to 20 percent in the federal government.

Both men were asked to address the major party presumptive nominees, Democrat Hillary Clinton and Republican Donald Trump, and had different responses.

Both men had praise for Clinton, with Johnson calling her a "wonderful public servant."

The tone changed for Trump, however. Johnson declined to criticize the GOP's presumptive nominee, except to say that if he'd been a Republican presidential candidate, he would not have pledged to support him, as others did.

When asked to describe Trump in a single word, Weld called him a "huckster."

"I think, Mrs. Clinton, what ever you think of various economic policies, is very well qualified to be president of the United States. I would not say the same of Mr. Trump, with all respect," Weld said.

In the most recent CNN poll, the Libertarian ticket received 9 percent support. In order to gain entry into the presidential debates, which Johnson said was key to creating a viable campaign in the fall, they must increase that support to an average of 15 percent in the polls.

He said he believes that is possible.

"Well, we would not be doing this if there were not an opportunity to win," Johnson said. "The only opportunity to win is to actually be in the presidential debates, the Super Bowl of politics. To do that, you've got to be at 15 percent in the polls. To do that, you've got to be in the polls. And right now, we see it day after day after day, two candidates running for president. Right now, it's showing at a level, if it were three names all the time, we would be at that level."

The candidates spoke on a number of issues throughout the hour-plus event:

-- On gun control: Johnson said he is opposed to banning individuals on the no-fly list and the terror watch list from buying guns outright because some of the names on there are in error. He is in favor of prohibiting individuals with diagnosed mental illnesses from buying them, but expressed skepticism about increasing government involvement in determining who is and is not mentally fit to own firearms.

He opposed a ban on semi-automatic assault rifles.

"Automatic weapons are not allowed in the United States. When you talk about semi-automatic weapons, that's a category that includes 25 million [weapons]."

-- On abortion: Johnson said he would not seek to change present law, which holds that a woman has the right to an abortion up to the point where a fetus is viable outside the womb.

"Bottom line, can there be a more difficult decision in anyone's life ... than that decision? That's a decision that should lie strictly with the woman involved," he said.

"I think it's OK for the government to be involved in ensuring clinic access because that's guarding a fundamental constitutional right for an individual. That's not nanny-state government, that's good government," he said.

Johnson went on to defend the controversial group Planned Parenthood.

-- On personal religion: Johnson said he is not the member of a specific religion, but he does pray.

"I have to admit to praying once in a while, and I do believe in God. I was raised a Christian. I do not attend church. I'm one of those, the God that I speak to doesn't have a particular religion."

-- On immigration: Both men oppose Trump's proposal to deport an estimated 11 million illegal immigrants and build a wall on the Mexican border.

"I find both of his statements incendiary and I am speaking as a border-state governor," Johnson said. "The deportation of 11 million illegal immigrants is really based on incorrect information. Building a wall on our border borders on insanity. We should make it as easy as possible for somebody who wants to come into this country to work to get a work visa. They are not taking jobs U.S. citizens want. These are hardworking individuals."

Weld went further, repeating his statement likening Trump's immigration policy to those of the Nazis, particularly for the "fear" that would be created as federal agents attempted to round up millions of undocumented people for deportation.

"I think Trump has succeeded in tapping into the very worst political traditions in the United States and other countries," Weld said. The amount of fear engendered in Europe ... Anne Frank hiding in the attic, hoping no noise would alert the Nazis below, they're directly analogous. The roundup that he has proposed ... that's going to generate a lot of fear, pit citizens and non-citizens against the government."

-- On legalizing drugs: Johnson supports legalizing marijuana completely, but said he opposes legalizing narcotics like heroin. He did express support for some foreign programs where heroin addicts can have their drugs tested for potentially lethal additives, and ingest the drugs under observation to prevent overdosing.

Weld said people are beginning to view drug addiction as a health problem, rather than a criminal one.

"Society is coming to view people who have serious issues with either narcotics or alcohol, that that is a public health emergency and that is not a status crime. There's some movement away from incarcerating people for possessory narcotics offenses and treating that as a public health issue.''

-- On the use of military force: Johnson said he opposes "interventionism" in U.S. foreign policy, but agrees the military needs to be funded to deter attacks and respond to them.

"There should not have been military intervention in Syria and the unintended result is, it's helped grow ISIS," Johnson said, referring to the Islamic State.

He called for a return to congressional authority over military action.

"If we are attacked, we will attack back, and you can argue we have been attacked by ISIS, but let's involve Congress in this," he said.

"I think, unfairly, free trade has come under criticism as crony capitalism," Johnson said. "Government can level the playing field for everyone. That level playing field really is free trade."

"In the purest sense, free trade is always going to benefit the United States because we have the highest rate of productivity and we are the most technologically advanced country in the world, so we are always going to have that edge. Free trade creates high-paying jobs," he said.

-- On taxes: Both men touted their records of cutting taxes as governors. Johnson said that, ideally, he would eliminate federal income and corporate taxes entirely and replace them with a "consumption tax."

Weld did not go as far as saying he would abolish the IRS, but did call for across-the-board spending cuts of 10 percent to 20 percent, which he said would force federal agencies to eliminate wasteful spending.

U.S. News // 1 hour ago
Utah bills would ease student dress codes for religious, cultural items
Feb. 6 (UPI) -- As high school students around the country fight for the right to wear religious and cultural items at graduation and athletic events, Utah is considering legislation to allow it.

U.S. News // 1 hour ago
Poll: American support for Ukraine remains high after year of conflict
Feb. 6 (UPI) -- A majority of Americans remains supportive of Ukraine as Russia's war in that country enters its second year, according to a poll released Monday.

U.S. News // 4 hours ago
U.S. farm belt expanding its role in renewable natural gas
Feb. 6 (UPI) -- Among the largest RNG facilities in the portfolio of Northern Biogas is an Idaho operation drawing on the waste of thousands of dairy cattle.

U.S. News // 5 hours ago
Dell plans to cut more than 6,600 Jobs due to plummeting PC sales
Feb. 6 (UPI) -- Dell plans to lay off 6,650 workers as the company responds to waning demand for its personal computers -- the latest tech giant forced to downsize as millions of inflation-weary consumers change their spending habits.

U.S. News // 5 hours ago
Buffalo hit with 3.8M earthquake; no damage reported
Feb. 6 (UPI) -- A 3.8-magnitude earthquake near Buffalo, N.Y., Monday morning rattled the nerves of residents around the region but not much else with no immediate damage or injuries reported, officials said.